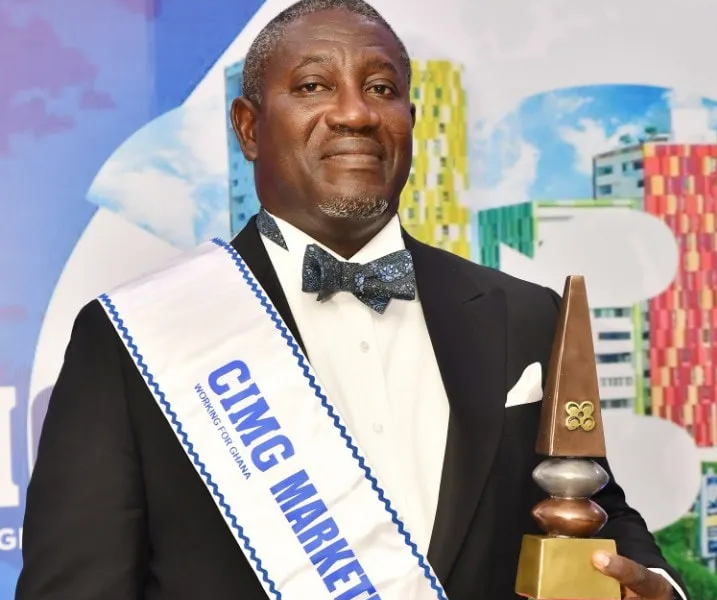 Daniel Wilson Addo, CEO of the Consolidated Bank Ghana named the Marketing Man of the Year by the Chartered Institute of Marketing Ghana (CIMG).
30.5k Shares

The Chief Executive Officer (CEO) of the Consolidated Bank Ghana, Daniel Wilson Addo, has been named the Marketing Man of the Year by the Chartered Institute of Marketing Ghana (CIMG).

The CEO of ABSA Bank, Abena Osei-Poku, has also been awarded the CIMG Marketing Woman of the Year.

The two banking executives were decorated with the top honours in the country’s marketing fraternity at this year’s CIMG Annual Marketing Performance Awards at a colourful dinner event in Accra last Saturday.

It was held on the theme: “Creative Marketing and Innovation In A Volatile Global Economy”.

The night when stakeholders in business gathered to be celebrated saw 43 companies and individuals receiving awards in various categories, including the CIMG President’s special awards which went to Erastus Asare Donkor, a journalist, for his “Destruction for Gold” documentary, and Alberta Afreyie-Mensah of Witama Agribusiness.

The Group Head of Marketing and Corporate Affairs of Hollard Ghana Holdings, Cynthia Ofori-Dwumfuo, clinched the prestigious Marketing Practitioner of the Year award, while Mark Mensa-Abban was named Marketing Student of the Year.


ABSA Bank retained its spot as the Bank of the Year, while Melcom was inducted into the Elite Hall of Fame of the CIMG.

The President of the CIMG, Dr Daniel Kasser Tee, said in view of the current global economic hardship fueled by the Russia-Ukraine war, leaders of businesses must strive to rationalise their operations to be able to protect the interest of investors, employees, and customers.

He said while employers rationalised their operations, it was expected that employees would be moderate in their demands.

“Employee associations and labour unions should also explore ways by which they can promote the interest of the employers in such challenging times. It is not all the time that employees should be agitating for higher wages. It is our wish that we could make it possible for every public sector organisation to keep and publish their individual books of accounts,” he said.

Dr Tee explained that a clear understanding of the current economic condition and sincere negotiations between employers and employees would help to bring transparency to bear, and make it possible for every public sector worker to see the profitability of their institutions.

“The absence of such transparency in the public sector is mainly responsible for the everyday agitations on the labour union front. The private sector workers are usually quiet, not necessarily because they are well paid, but because they know what their organisations are capable of paying, at least from the published accounts,” he said.

The President of the National Institute of Marketing of Nigeria, Idorenyen Enang, who was the special guest of honour, said business owners and public sector managers and customers expected an awful lot more from their engagement with brands, companies and businesses than that which resulted from an exclusive focus on product, price, place and promotion.

He said branding and the business of marketing had become complicated in a new world of volatility where disruptive technologies held sway.

For marketers to succeed in today’s global economy, Mr Enang said there were three broad trends that must catch the attention of all marketers because it would impact on the role of marketers.

These, he said, included the dominance of the customer, the impact of digital system and the need for brands to quickly turn customer data into actionable insights, as well as the challenges of marketing to a global audience.

“Top management must think through how best to coordinate a multifaceted selling effort driven by centralisation without unduly restricting initiative and responsibility within the local and national segments,” he said.

Enterprise Trustees won Corporate Pensions Trust of the Year; the Best Media Organisation went to Multimedia Group, while Rural Bank of the Year went to Atwima Kwanwoma.
Vodafone was adjudged the Telecom Company of the Year, while Passion Air won the Best Domestic Airline of the Year.