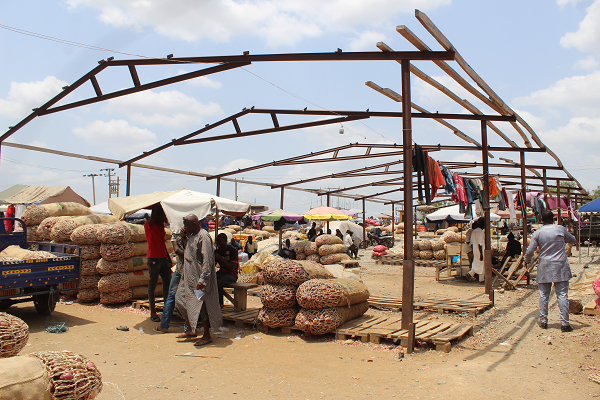 Eight months after relocating from Agbogbloshie to Adjen Kotoku, onion sellers continue to express disappointment over inadequate amenities and limited space to ply their trade in the new market.

Adequate washroom facilities, potable water, as well as a mosque to serve the predominantly Muslim population at the market, are developments the traders said they were yet to witness.

An eight-seater lavatory facility is the only available washroom serving the over 2,000 bulk breaking traders and their customers in the area, regular visits by the Daily Graphic spanning over five weeks have revealed.

Additionally, the limited number of sheds at the place has driven some of the traders into open spaces, exposing them to harsh weather conditions. 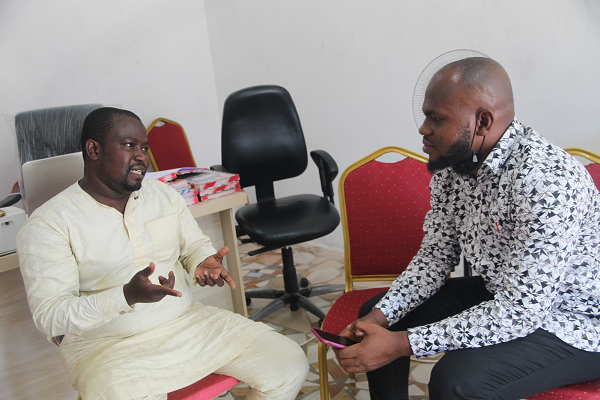 The Greater Accra Regional Coordinating Council (GARCC), in July last year, as part of its “Let’s Make Accra Work” initiative, relocated all bulk breaking traders and scrap dealers who were operating at Agbogbloshie to the Adjen Kotoku Market in the Ga West municipality.

The move was to help reduce congestion, as well as the amount of filth generated at the Agbogbloshie Market.

After their relocation, however, the Agbogbloshie parcel of land is still lying fallow, with no clear plans on the use it will be put to.

The exercise was initially met with strong resistance from the traders, but they later agreed to move, on condition that the government would provide the new market with a mosque, toilet facilities, as well as a banking facility, to ensure the safety of their business.

The market needs at least a 48-seater toilet facility, a urinal with about 40 stands and 20-booth bathroom facilities to prevent open defecation and ensure sanity in the area.

The Minister of Sanitation and Water Resources, Cecilia Abena Dapaah, during an inspection tour of the place after the relocation of the traders, promised to provide those facilities.

The Ga West Municipal Assembly (GWMA), in whose jurisdiction the market is situated, also assured the traders that development of the market would be hastened with the provision of enough sheds, stalls and amenities to help create a harmonious environment for them and the inhabitants of Adjen Kotoku, near Amasaman.

During its last visit to the market on Wednesday, March 2, the Daily Graphic observed that the available sheds could not cater for most of the traders, as a result of which many were seen with their wares in the open.

Those who could not bear the heat from the sun used umbrellas as shields.

The limited washroom facility was also creating a lot of inconvenience for both traders and buyers, a situation that had opened the floodgates for open defecation.

Some of the traders were spotted urinating at open spaces by the market, leaving an unpleasant smell in the area.
Work on the proposed bigger mosque promised them was yet to start.

It was observed that some parts of the market where sheds were located had been paved, while the open spaces were still dusty.

Due to that, those who traded in the open had to cover their faces to avoid inhaling too much dust.

The outdoor lighting system in the market also did not cover the parking spaces where goods are often offloaded and sent to the market. As such, goods arriving in the market at night had to be offloaded by the traders with light from torches and electric lamps.

Also, the original scope of work on the market, which encompassed a school and a police station, had not yet been activated.

Meanwhile, no serious criminal offences had occurred in the market, while there were some schools available in the area, the traders said.

It was also observed that the only borehole that served the entire market dried up regularly during the dry season.

The traders confirmed that the situation often drove them into people’s homes to beg for water for their daily use.

The Secretary of the Accra Onion Association, Osman Mohammed Sidni, stated that aside from the limited shelves and the washroom facilities, there was also a challenge in getting a place to offer prayers.

He said the mosque that currently served the whole town was too small to contain them.

As a result, Mr Sidni said, they were left with no other option than to offer prayers under the sheds, with prayer sessions being sometimes distracted by loud noise from moving vehicles and activities in the market.

On the issue of limited sheds, he said anytime it rained, those who occupied the open spaces had to close for the day.

Also, Mr Sidni said, there were some storage units in the market which the assembly said were going to be shared among the various onion groups to serve as storerooms for their wares, but no such allocation had taken place.

Due to the lack of a secure storage room, he said, onions were left under the sheds after each day’s sales and most of them went bad as a result.

Mr Sidni said the leaders of the various onion groups had held several meetings with the assembly to help address their challenges, but nothing had materialised.

“The assembly keeps assuring us that it is going to meet our demands, but as I speak with you, we haven’t seen any sign. Most of our people are moving to the Domenase Market around Kasoa because they prefer that place,” he said.

“We want to preserve sanity in this area to ensure it doesn’t become like where we were at Agbogbloshie, but the assembly is not helping,” Mr Sidni added.

The Municipal Chief Executive (MCE) for Ga West, Clement Wilkinson, debunked all the claims by the traders.

He said the assembly had, early on, made available a piece of land for the Ministry of Sanitation and Water Resources to construct a 48-seater lavatory, a urinal with 40 bowls and bathroom facilities with 20 booths.

However, he said, the project could not commence because the traders protested that they would allow for the construction of only more sheds on the said land.

“They said the assembly should rather provide a different piece of land for the washroom project because they claimed the land was for the extension of the market and not for any other project.

“We tried several times to convince them but that failed and that’s how come the project has not yet begun,” the MCE explained.

However, Mr Wilkinson said the assembly had managed to secure another piece of land located a few metres away from the project.

The MCE added that the Environmental Protection Agency (EPA) had already given a permit and currently the project design was ongoing.

On the limited sheds, Mr Wilkinson said previously there were only two sheds in the market and the government had managed to add 14 more, bringing the number of sheds to 16.

“That is not all; we have more sheds in the pipeline and that project will commence soon. I will be visiting the place very soon with my team to secure areas for the project,” he said.

Social amenities for onion sellers in Adjen Kotoku in the offing