Social amenities for onion sellers in Adjen Kotoku in the offing 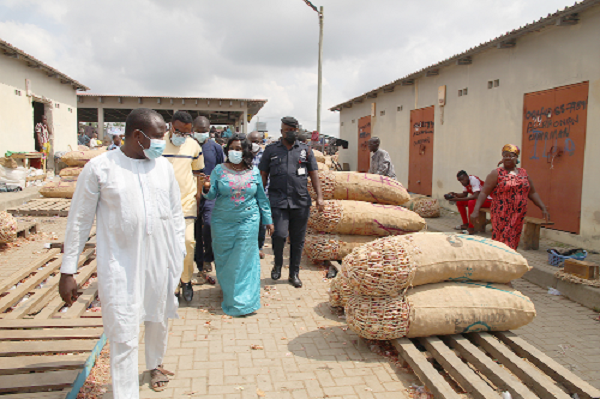 A number of social amenities have been earmarked for onion sellers at the Adjen Kotoku Market in the Ga West Municipality as part of measures by the government to prevent open defecation and ensure proper sanitary conditions in the area.

These include washrooms and urinal facilities.

This was disclosed by the Minister of Sanitation and Water Resources, Ms Cecilia Abena Dapaah, when she embarked on an inspection tour of the market last Tuesday to assess the state of sanitation in the area.

She said currently, discussions were still ongoing between her ministry and the Ministry of Finance to secure funds for the project.

During the tour, it was observed that the traders, in their hundreds, had occupied the market with only few sanitary facilities available to them.

Although there were no signs of open defecation, the traders had resorted to urinating in the open spaces in the market due to the situation, producing a pungent smell in the area.

During an interaction with the leadership of the onion sellers, the spokesperson, Mr Ali Umar, indicated that the limited washroom facilities in the area had been their major challenge.

He said currently, there were about 15 mobile toilets, as well as a six-seater toilet facility serving over 2,000 onion sellers.

As a result of that, he said the traders sometimes had to go to nearby houses for assistance.

He said the ones provided them were not enough and that was contributing to indiscriminate disposal of waste by the traders.

In response to that, Ms Dapaah indicated that the government was bent on providing all the necessary infrastructure to ensure that they engaged in their trade without any challenges.

“The construction of an ultra-modern washroom facility will commence immediately; we are in the process of securing funds for the project and the contractor will start soon,” she said.

Aside from that, she said the ministry would continue to monitor the activities in the area and make sure that every other sanitation challenge was addressed.

Ms Dapaah also urged the traders to channel all their plights through the Ga West Municipal Assembly (GWMA) for quicker results.

She further pleaded with the traders to maintain sanitary conditions in the market by practising proper hygiene and ensuring proper disposal of waste in the area.

The Municipal Chief Executive (MCE) of the GWMA, Mr Clement Wilkinson, also assured the traders of the assembly’s resolve to make sure that the market was safe and secure for their trade.

He said discussions were still ongoing to speed up development in the area and also construct more sheds to accommodate other traders.