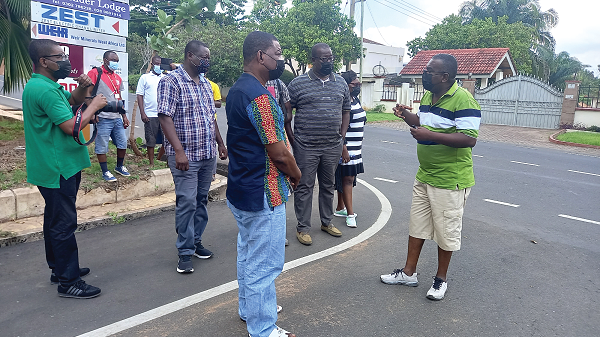 The Graphic Communications Group Limited (GCGL) has organised training on technical writing for some members of its Editorial Department.

Participants at the three-day training, which ended last Saturday with field visits to some parts of Accra and Tema, were exposed to spatial and land use planning, how permits are given for structural designs and development and some areas where journalists of the GCGL could focus on.

The training and the field visits showed that the country had well intentioned plans for development, but the failure of institutions and people in authority to enforce regulations was derailing the gains and defeating the purpose of planning.

The expert facilitators were a Principal Architect at Tekton Consult and lecturer at the Central University, Mr Tony Asare; the President to Ghana Institute of Planning (GIP), Mr Mohammed Alhassan; the Executive Director of Research at DevtPlan Consult, Mr Percy Anaab Bukari, and a Planning Consultant, Mr Sylvester Gabianu.

They also highlighted the systems for measuring performance at the metropolitan, municipal and district assemblies (MMDAs), as well as how to write technical issues for ordinary audiences.

The Editor of the Daily Graphic, Mr Kobby Asmah, explained that the technical training was part of the company's strategy to equip the Editorial team and journalists with the skills to communicate effectively on urban planning and related issues.

He observed that since urban planning and the regulatory regimes were quite a technical field, the GCGL welcomed the experts, some of whom had been contributing articles to the Daily Graphic, to build the capacity of its journalists and foster rapport with them to put the spotlight on the efficient planning of cities, permitting and the enforcement of regulations.

During the first two days of the programme, the resource persons highlighted key issues on slums upgrading, flooding in the capital city, the role of MMDAs in addressing the menace of children on the street and permitting regimes for spatial, structure and local plans.

It ended on Saturday with a visit to the Airport Residential Area, settlements along railway lines, Ashaiman and Tema to have practical experience of the issues discussed.

At the Airport Residential Area, the team observed that although the area was zoned as a residential enclave, it was fast becoming a commercial area, as large offices, organisations and eateries had sprung up.

The team also observed that a number of reservations (the space between a house and the street) had been encroached on by permanent and makeshift structures, many of them sited on the utilities — water, telecommunications and sewerage.

It further observed that the reservation along the railway line in that area had been encroached on by a sprawling slum community that straddled the railway.

A number of illegal structures that served as accommodation had been erected on the buffer along the rail line, and although those structures were situated very close to the railway line, they had been duly connected to electricity.

In Ashaiman, the team went to a slum community at Tulaku to learn at first hand the model slum improvement project that had been undertaken in the area, with support from UN Habitat.

The last port of call was Tema, where the team went into some of the communities, including Four, Six and 12, to learn more about the well-planned settlements.

Mr Asare, an architect who has written extensively on some ills in the spatial planning space, commended the GCGL for the initiative to partner technocrats to properly communicate technical issues to members of the public.

He said writing on development and spatial planning ought to be done in a manner that would bring out multiple angles to the issues within legal frameworks.

He encouraged the Daily Graphic to use the huge influence it had in the media space to lead discussions on urban development to help build resilient cities.