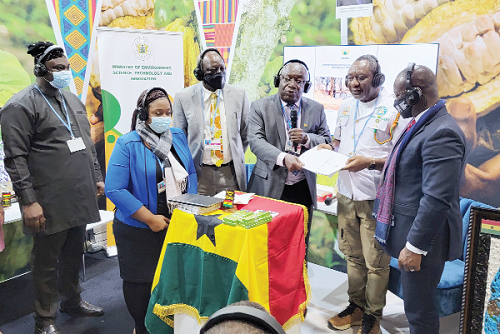 Ghana Day was marked yesterday at the ongoing climate change conference (COP 26) in Glasgow, Scotland with the showcasing of the major initiatives the country is taking to address climate change.

The initiatives include the integration of climate change into school curricula, the installation of 120MW grid-connected solar PV capacity in the national generation mix and the creation of the first ever renewable energy with a capacity of 650MW at the Bui Power Authority.

Others include transitioning the Volta River Authority (VRA) to increase its energy portfolio, integration of solar in some strategic government institutions (roof to solar), as well as the installation of solar PV at the Jubilee House by the end of the year.

The commemoration attracted some foreigners to the Ghana Pavilion.

The transition, he said, was scaling up penetration of renewable energy and sustainable energy and accelerating Ghana's efforts to mobilise investments into climate actions.

The Deputy Minister of Transport, Mr Alhassan Tampuli, said the ministry was determined to introduce measures to move the country closer to meeting the global goal on climate change.

"Our desire is to ensure that appropriate investments and incentives are in place to facilitate the emergence of greener, more efficient and sustainable modes of transportation in Ghana.

“Our focus is, therefore, on promoting a technological shift from conventional fossil fuels to more environmentally benign alternatives, while at the same time promoting walking and cycling," he said.

At the moment, he said, the focus was on scaling up sustainable mass transportation systems, renewal of public transport fleet, introduction of electric buses on the urban transport landscape and other environmentally friendly transport modes, including cable cars, the promotion of inland water transport systems, among others.

In respect of maritime transport, he said Ghana, as a member of the International Maritime Organisation (IMO), had committed to the implementation of a new limit on sulphur content in marine fuels.

"It is worthy to know that as part of Ghana’s commitment to cleaner fuels, in August 2017 it reduced the sulphur requirements in its fuels from 3000ppm to 50ppm for diesel and 1000ppm to 50pmm for petrol. Ghana was rewarded for this feat at the COP 23 held in Bonn, Germany, in November 2017,” he said.

Mr Tampuli said Ghana was also making other investments in the railways sector, as well as the promotion of environmentally friendly alternatives, including cable cars for public transportation.

In an address read on his behalf, the Minister of Energy, Dr Matthew Opoku Prempeh, said the subject of energy transition had become one of the most important global issues for discussion from the industrialisation, social and economic development standpoint, adding that the ministry remained resolute in its commitment to the sustainable development goal (SDG) Seven to ensure the availability of clean, affordable and accessible energy for all Ghanaians.

He said Ghana had made modest progress in scaling up climate actions and cited the roof-top solar programme which was catching up with estate developers.

One good example, he said, was Ultimo Gardens Townhomes under construction in the heart of Accra’s Roman Ridge, where each unit came with roof-top solar to complement consumption from the electric grid.

The household energy sector, he said, was often either forgotten or little attention was paid to it in the current era of energy transition, but Ghana was going all out to overcome the challenge.

According to him, Ghana was redefining the clean cooking sector with strategies to bring increased climate financing into the country and improve the health conditions and livelihood of the people.

Dr Prempeh said in the area of clean cooking, the government’s policy focus was in two main areas, namely: efficient use of biomass and Liquified Petroleum Gas (LPG).

"For the LPG promotion programme, government's overall objective is to reduce the dependence on biomass for cooking and heating from the current 72 per cent to 50 per cent by 2030 through the promotion of LPG under the LPG4D programme.

“The policy centres on the free distribution of LPG cylinders and sensitisation of the rural population. And this is expected to translate into about three million households adopting the use of LPG, reduce carbon dioxide emissions by eight million tonnes, save 130-220 million trees and save 12,000-19,000 lives from indoor air pollution-related deaths,” he said.