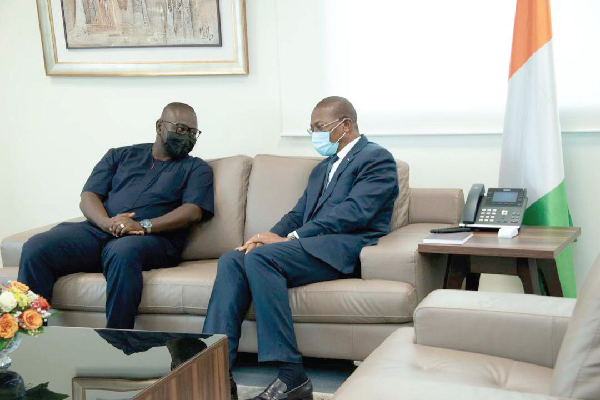 The Minister of Works and Housing, Mr Francis Asenso-Boakye, has paid a courtesy call on the Minister for Construction, Housing and Urban Planning of Cote d'Ivoire, Mr Bruno Nabagné Koné, in Abidjan.

The visit was aimed at deepening the ties of co-operation between the two countries in the housing sector, especially with regard to providing affordable housing.

Speaking at the meeting, Mr Asenso-Boakye said the government of Ghana was exploring all suitable options to provide safe, decent and affordable housing for the Ghanaian people.

He noted that bilateral relations between the two countries had been deepened under the leadership of President Nana Addo Dankwa Akufo-Addo and his Ivorian counterpart, President Alassane Ouattara, resulting in increased co-operation in the sectors of agriculture, maritime and energy.

“Our cooperation in the cocoa sector has resulted in the agreement of a common base price for our cocoa to cushion farmers in both countries,” Mr Asenso-Boakye said.

On the AfCTA, Mr Asenso-Boakye said it was imperative that both countries took advantage of the strategic framework to effectively drive their industrialisation.

For his part, Mr Koné commended the Ghanaian delegation for the courtesy call and was hopeful that both countries would capitalise on the close ties between them to share ideas and best practices in the housing and construction industries.

As part of the visit, the Ghanaian team toured various affordable housing projects in Cote d’Ivoire. Mr Asenso-Boakye later expressed his gratitude for the warm reception accorded him and his team during their visit.

The Works and Housing Minister was accompanied on the visit by officials from the ministry and the State Housing Company.