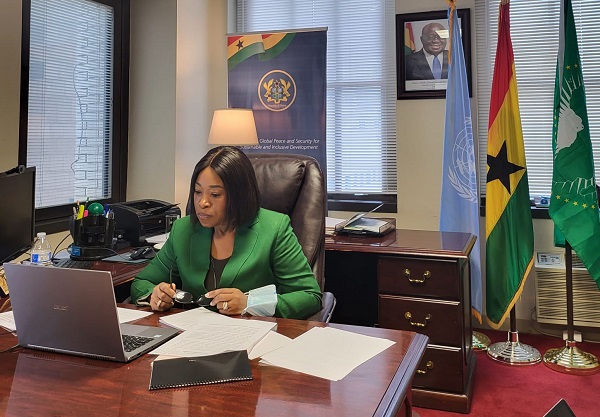 Ghana has condemned Russia's unprovoked attack on Ukraine and called for a withdrawal of troops and an end to the war.

This was made known by Ghana's Minister for Foreign Affairs and Regional Integration, Shirley Ayorkor Botchwey in a tweet on Thursday, February 24, 2022.

She tweeted: "Today, the world woke up to the bombardment and invasion of Ukraine by the Russian Federation. Ghana condemns unreservedly this unprovoked attack on the sovereignty and territorial integrity of a United Nations Member State and calls on Russia to withdraw and end the war".

It will be recalled that Ghana's Ambassador and Permanent Representative of Ghana to the United Nations, Harold Adlai Agyeman had on Thursday indicated the country’s support for the sovereignty and territorial integrity of Ukraine.

Making a statement at an emergency UN Security Council meeting before the invasion of Ukraine by Russian troops, Ambassador Agyeman said the situation had implications not only for Ukraine and its immediate neighbours but also for all countries.

“We note with concern, the risks that an escalation of the situation in Ukraine hold for global peace and security and stress that those that choose the path of conflict rather than peace bear the consequences of their actions,” Ghana’s representative at the UN stated.

“We are concerned by reports of the commencement of hybrid warfare against Ukraine, especially attempts of cyberattacks against some of its critical infrastructure.”

“It may be begging the question, but nonetheless worth repeating. Ghana unreservedly stands by the sovereignty and territorial integrity of Ukraine, a bona fide Member State of the United Nations, whose membership of this Organization provides for her guarantees over her internationally recognized borders, the same borders with which she joined this Organisation.”

Over 1000 students and other Ghanaians in Ukraine have been directed to seek shelter.