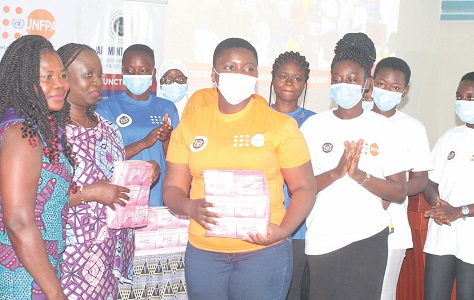 Director of the Department of Gender under the Ministry of Gender, Children and Social Protection (MOGCSP), Faustina Acheampong, has said gender inequality and sexual and gender-based violence are major factors undermining the health, dignity and autonomy of girls and women.

She said education and mentorship programmes, therefore, remained key the empowerment of girls, without which they would be denied the opportunity to develop to their full potential and play productive roles in their families, societies and the country.

Ms Acheampong said this at the 2022 National Gender Equality Clinic for adolescent boys and girls in Accra yesterday[July 7, 2022].

The clinic, which sought to educate adolescent girls and boys on gender equality, sexual and gender-based violence and sexual and reproductive health rights, was attended by over 100 adolescents across the regions of the country.

Ms Acheampong was speaking on behalf of the sector Minister, Cecilia Abena Dapaah.

She said reducing inequality would strengthen the economy and help build a stable and resilient society that would give all individuals the opportunity to fulfill their potential.

“In Ghana, adolescent girls are mostly vulnerable to harmful traditional and cultural practices, sexual and gender-based violence of all forms and unwanted pregnancies.

“Available statistics indicate that in 2019, 14,920 cases, including rape, defilement, incest and compulsory marriage, were reported to the Domestic Violence and Victims Support Unit (DOVVSU) of the Ghana Police Service,” she said.

In order to address the problem, she said, the government, through the MOGCSP, had developed many policies and enacted laws to protect girls and ensure that they grew up to attain their full potential

to contribute meaningfully to national development.

Similarly, she said, through the Ghana Education Service, the government had introduced the back-to-school campaign and re-entry policy to ensure that school drop-outs and pregnant girls returned to school to continue their studies for the development of their lives and society.

Ms Acheampong gave an assurance that the ministry would continue to coordinate gender-related issues that would provide adolescents with the right information, knowledge, skills and services in order to protect them from unplanned pregnancies and harm, while empowering them to make choices and expand their skills and knowledge base for national development.

In a speech read on his behalf by the Gender Analyst of the UNFPA, Selina Owusu, the acting UNFPA Representative in Ghana, Barnabas Yisa, lauded the participation of boys at the clinic, explaining that it was a strategic approach to empower them to become advocates and allies for women and girls’ empowerment and gender equality in general.

Mr Yisa urged boys to be active gender equality advocates among their peers at home and in the communities and institutions, adding that by so doing, they would break the vicious cycle of inequalities for a more gender equal society that would ensure sustainable development for all.

For his part, the acting Upper East Regional Director of the Department of Gender, James Twene, said it was important for society to acknowledge that its potential for growth and prosperity could be achieved if all women and girls were empowered and accorded equal opportunities like boys and men.