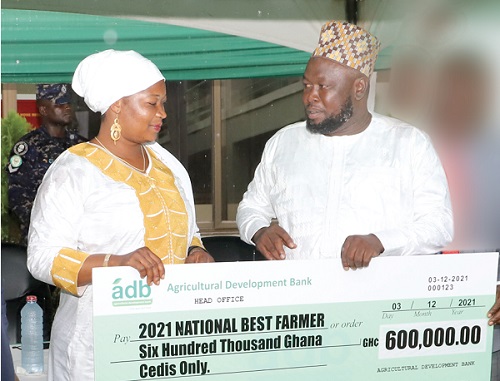 Last Wednesday, the Agricultural Development Bank handed over a dummy cheque for GH¢600,000 to the 2021 National Best Farmer, Alhaji Mohammed Mashud, as the ultimate prize.

Alhaji Mashud has submitted a proposal to invest the money in a broiler project estimated to cost GHc1.1 million.

The significance of converting the ultimate prize of a fully furnished three-bedroom house at a location of the choice of the best farmer into cash cannot be underestimated.

Surely, a farmer with the pedigree to emerge as a national best farmer should be more than capable of owning a mansion as was echoed by the 2020 Best Farmer, Solomon Kusi, then 55, who put up his first storey building when he was about 35 years.

So, the decision by the Ministry of Food and Agriculture in consultation with the ADB Bank and other stakeholders to move away from the house as the prize to cash to enable the winners expand their farming activities is a major innovation the government brought to bear on the awards.

It is important to note that in embarking on any chosen project by the best farmer, it will not only expand his farming activities, but also support other farmers and create job opportunities for the youth in the operational area where the farm is located.

Since 2017 when the decision to convert the ultimate prize to cash was taken, all the beneficiaries have so far have expanded their farms, supported farmers within their communities, employed many more youth and diversified farming activities in their communities.

The 2017 winner, Philip Kwaku Agyemang, who was the first to receive the cash prize of GH¢440,579 instead of the house, pledged to expand his farm and subsequently employed more people and supported other farmers with best practices.

For his part, the 2018 winner, James Obeng Boateng, who received GHc480,000, in his proposal pledged, among other things, to expand his farm, employ more people, repair access roads leading to his farm and to make his farm available for university students for practical training.

The 2019 winner, Charles Gyamfi, pledged, upon receiving his GH¢536,000 prize to, among other things, train more extension officers, inject some of the funds into irrigation infrastructure, purchase more machinery, build the capacity of his workers and also employ more people.

For his part, Solomon Kwadwo Kusi, the 2020 National Best Farmer, who took home GH¢570, 000, pledged to acquire and install a cocoa drying house, expand his farms, upgrade and expand his mechanisation centre for the benefit of other farmers in the area and subsequently, employ more workers.

In following the footsteps of his predecessors, last Wednesday, the 2021 winner, Alhaji Mashud, came up with a proposal to invest the cash into a broiler project to cost GH¢1.1 million.

It is clear that over the last four years, the decision by the farmers to invest the cash prize instead of putting up individual houses could have a ripple effect that is likely to be unprecedented.

Each of the four winners from 2017 to 2020, showed that the prize did not benefit them alone, but other farmers in their area, created more jobs for the youth in their areas and also supported their communities with various social amenities.

In a similar fashion, Alhaji Mashud's plan to inject the prize money into expanding his 8,400 broiler project will create a number of job opportunities in his area.

Already, he has a current workforce of 51 permanent employees and over 1,000 casual workers.

The good thing is that the ADB Bank, the headline sponsor of the National Farmers Day celebration, for over 20 years running, does not hand over the cash prize to the beneficiaries and go back to sleep but ensures that they truly utilise the fund according to their proposals.

The supervisory role of the bank puts the beneficiaries on their toes to ensure that they work within their own proposed plan during which the fund is released in tranches.

It is hoped that subsequent winners of the ultimate prize will continue to utilise it not only for their benefit, but for other farmers in their area and the unemployed youth.