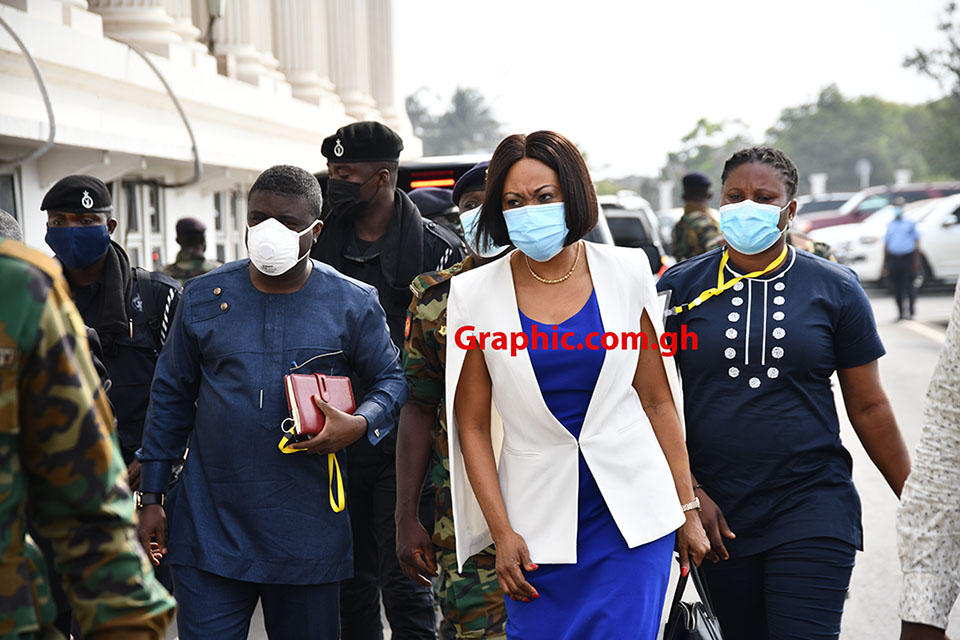 It had been billed by some as the highlight of the 2020 presidential election petition, but the possibility of the Chairperson of the Electoral Commission (EC), Mrs Jean Adukwei Mensa, being cross-examined is now in dispute.

The Supreme Court will settle that dispute tomorrow when it rules on an application by lawyers for the EC, the first respondent, urging the court to uphold its decision not to call any witness.

The court’s decision will also apply to President Nana Addo Dankwa Akufo-Addo, the second respondent in the petition, who has also decided not to call any witness.

If the court upholds the application, it means the petition will be nearing its closing stages, as what will be left will be lawyers filing their written addresses, followed by judgment by the court.

However, if the court dismisses the application, lawyers for the EC and President Akufo-Addo will have to call their witnesses to mount the witness box and swear oaths for their witness statements to be adopted as evidence.

Mrs Mensa and Mr Peter Mac Manu, the expected respective witnesses for the EC and President Akufo-Addo, will then be cross-examined by Mr Tsatsu Tsikata, lead lawyer for the petitioner, former President John Dramani Mahama.

Over three hours of legal arguments yesterday on whether or not Mrs Mensa should testify, lawyers for the parties (Mr Mahama, the EC and President Akufo-Addo) made their respective arguments before the apex court.

They touched on the rules of court relating to witnesses, case laws on the rights of parties to call or not to call witnesses to adduce evidence, vis-a-vis the court’s power to intervene in the exercise of those rights.

Lawyers for the respondents — Mr Justin Amenuvor (the EC) and Mr Akoto Ampaw (President Akufo-Addo) — took the position that the rules of court, specifically the High Court (Civil Procedure) Rules, 2004 (C.I. 47), and its subsequent amendment, C.I. 87, supported their decision not to call any witness.

That was, however, refuted by Mr Tsikata, who submitted that respondents’ position was not in compliance with any rule of court, including C.I. 99, the rules governing presidential election petitions.

He argued that Order 36 Rule 4(3) of C.I. 47 allowed a defendant the right to ‘elect’ or choose to adduce evidence, saying his client (the EC) had chosen not to adduce any evidence and would, therefore, not call any witness.

“If the petitioner (Mahama) has a good case, he should be dancing and happy about the position taken by us,” counsel argued.

It was also the case of Mr Amenuvor that the court could not compel the respondents to call witnesses, as the issue of whether or not a witness should testify “is not the business of the court”.

Mr Ampaw threw his weight behind the position taken by Mr Amenuvor and added that the petitioner could not force the respondents to call witnesses.

The petitioner, he added, could, therefore, treat the witness statement filed by the expected witnesses of the respondents as hearsay evidence, in conformity with Rule 3E (5) of C.I. 87.

“Unfortunately, the petitioner has closed his case and cannot do that,” counsel added.

Mr Tsikata disagreed completely with all the points raised by lawyers for the respondents and attacked them accordingly.

First, he argued that the EC had already ‘elected’ to adduce evidence when Mrs Mensa filed a witness statement.

Also, cross-examining Mrs Mensa, he argued, was germane to the petition, as it was the EC Chairperson who made the declaration of the 2020 presidential election results, signed the answer of the EC to the petition and also signed all the supporting affidavits.

“As of the time the application was put before the court, the first respondent (EC) had elected to adduce evidence. It has filed a witness statement signed by Mrs Mensa and various affidavits where she had essentially offered herself for cross-examination,” he added.

Another leg of counsel’s argument was that the cross-examination of Mrs Mensa would be in the interest of justice.

He posited that the case was not an ordinary case which talked about the private interest of people but that it was at the heart of the sovereign will of the people of Ghana to elect the President of the country.

It was his case that as the Chairperson of the EC, Mrs Mensa had a constitutional duty to account to the people of Ghana how she discharged her duties during the 2020 elections, especially those in contention in the petition.

“She wants to shield herself from accountability by not submitting herself to cross-examination. She must account for that public duty and the best forum to do that is the Supreme Court,” Mr Tsikata added.

He argued that as per the results announced by Mrs Mensa on December 9,2020, no candidate garnered more than 50 per cent of the total valid votes cast, as required by  Article 63(3) of the 1992 Constitution.