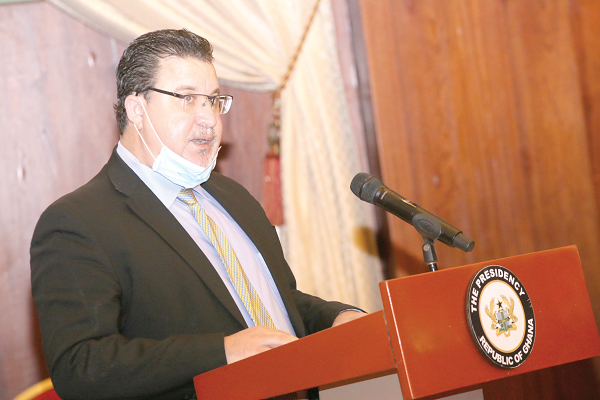 The government and the World Bank are holding discussions to secure funding to procure COVID-19 vaccines for Ghana.

The World Bank Country Director, Mr Pierre Frank Laporte, who confirmed this to the Daily Graphic yesterday, said the bank had already concluded informal discussions with the government and expected a formal request from the latter.

“Basically, we have had informal discussions with the Minister of Health and the Minister of Finance, but we are yet to receive a formal letter of request from the government, which I believe will be soon,” he said.

President Nana Addo Dankwa Akufo-Addo had said the government had commenced discussions with some COVID-19 vaccine manufacturing companies, with the goal of ordering suitable doses of the vaccines for use in Ghana.

That followed the completion of work by the committee formed by the government to recommend the appropriate decisions on COVID-19 vaccines.

The President made this known last month when he opened the 72nd annual New Year School and Conference in Accra, saying details of the committee’s work would be announced very soon.

A source close to the Presidency told the Daily Graphic yesterday that the government was relying on multiple sources of funding to procure COVID-19 vaccines, which were expected to be in the country by the end of next month.

Mr Laporte, who was speaking to the Daily Graphic on the bank’s assistance to the government in the procurement of COVID-19 vaccines, said the global development finance bank was treating such funding with urgency, adding that the funding would be ready in a matter of weeks once a request was made.

“The money should be ready by April because this is an emergency; but right now we have not firmed up any figure,” he said.

The World Bank had, a fortnight ago, encouraged African countries that had not yet requested its support to send letters to their World Bank Country directors asking for support for vaccine procurement and deployment from the $12 billion facility which the Governing Board of the bank had approved.

It also urged African countries to focus and prioritise efforts towards the funding programmes and not slow down the momentum through complex contracts and intermediaries.

Mr Laporte said internally, the bank had already had discussions with manufacturers and suppliers of vaccines on procurement and other logistical strategies.

He said Ghana’s preparedness to receive the vaccines had been one of the bank’s main concerns and part of its discussions with the Ministry of Health.

“Are people adequately sensitised to the vaccination? Is there a healthcare team ready to receive the vaccine? Vaccines are not normal medicines and so there needs to be some preparedness beforehand,” he said.

Mr Laporte was throwing light on any specific assistance the World Bank Group was offering Ghana.

The interview came on the heels of a presentation the President of the World Bank Group, Mr David Malpass, had made to African countries, stressing the need for them to prioritise the roll out of COVID-19 vaccines.

In a virtual meeting on the bank's COVID-19 Financing Strategy for African countries a fortnight ago, Mr Malpass had said every month of delay cost the continent $13.8 billion in Gross Domestic Product (GDP).

“That is in addition to the loss of lives and human capital,” he said.

He said the bank could assist with facilitating the procurement of vaccines for countries in Africa.

Mr Malpass stressed that where there were gaps in readiness, the countries should work quickly to fill them.

He said since the outbreak of COVID-19 in March last year, the bank had committed $25 billion to African countries to support their health and economic recovery and that it expected to commit an additional $15 billion by June this year.

“The funds are available now, and for most African countries, the financing will be on grant or highly concessional terms. The International Finance Corporation (IFC) is working to mobilise financing for vaccine production and therapeutics focused on developing countries,” he said.

He said in implementing the vaccines programme, the bank was working directly with governments, including financing their purchases from vaccine manufacturers and via COVAX.

“For deployment efforts, we’re working with partners such as the World Health Organisation (WHO) and UNICEF,” he said.

According to the source at the Presidency, the government was relying on multiple sources of funding to procure COVID-19 vaccines.

It said in one such arrangement, the government sent an indemnity, a sovereign guarantee, last Friday to help secure the funding.

“There are other means, and as it stands now, some thousands of vaccines will be coming into the country in two weeks,” it said.