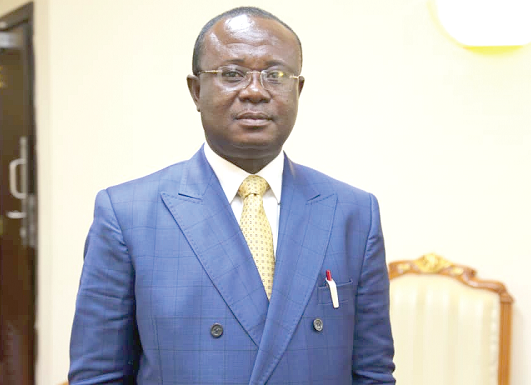 The decision to vet these two nominees ahead of the other 33 nominated for various positions is to ensure that the government becomes functional to carry out the business of state.

“Priority will be given to some nominees, particularly for Health, because of the COVID-19 situation in the country, followed by those of National Security and Finance,” the Minority Leader and Ranking member of the ACP, Mr Haruna Iddrisu, had earlier explained.

Due to the COVID-19 pandemic, the sitting of the ACP will be under strict COVID-19 safety and preventive protocols.

This year’s vetting is billed to be different from previous vetting processes, as the 26-member ACP, chaired by the First Deputy Speaker, Mr Joseph Osei-Owusu, will critically scrutinise and probe deeper into the backgrounds of the nominees.

Mr Iddrisu gave an idea of what to expect when he told the Daily Graphic that: “This year’s vetting and scrutiny will not be all about curriculum vitae or CVs.”

Ahead of the exercise, the  Daily Graphic is reliably informed that the committee has received the handover notes from the various ministries.

In compliance with the provisions of the Presidential (Transition) Act, 2012 (Act 845) that requires ministries, departments and agencies (MDAs) to provide Parliament with their handover notes, the Table Office of Parliament has acknowledged receipt of the notes.

Prior to the commencement of the vetting process, the Chairman of the ACP writes to the various intelligence and security agencies to elicit information on nominees as to whether they have committed a crime before.

The agencies are to issue communication privately and confidentially to the chairman, who makes it known to the committee.

The chairman also writes to institutions where nominees had worked previously to find out about their conduct with regard to how they discharged their duties at post and whether there were issues of financial malpractice against them.

Besides, the chairman also writes letters to the various educational institutions nominees attended to verify if, indeed, they attended those schools.

It must be established that the committee will be less interested in ethical issues concerning nominees, as all human beings are potentially fallible in terms of values and virtues, except where those values may impact seriously on productivity, accountability and related values that are important for purposes of performing effectively as government appointees.

Petitions against nominees may also have been received from members of the public prior to the beginning of the vetting of the nominees.

When the Chairman of the ACP is satisfied with details about nominees, the vetting is done in the full glare of the public, but in-camera discussions by the committee may come up when there are sensitive matters concerning a nominee.

After the vetting of a nominee, the committee may reach consensus on his or her suitability. However, where there is no consensus, the committee members will undertake secret balloting to approve or reject him or her.

Order 172 (8) of the Standing Orders provides that where a nominee fails to get 50 per cent of the votes cast by members of the committee, he or she is rejected.

Regardless of the outcome of any voting, the committee, as a microcosm of the 275-member Parliament, must make observations and recommendations to the House as to the suitability or otherwise of a nominee three days after the vetting process.

Even if the committee intends to reject a nominee, it must spell out, in a report, its decision to reject him or her after failure to reach consensus at the committee level.

“The ultimate decision on a nominee is taken at plenary. The committee will submit observations and recommendations after the vetting to plenary, which takes the decision ultimately on the person,” the Majority Leader, Mr Osei Kyei-Mensah-Bonsu, told the Daily Graphic.

“These nominees are to be approved by Parliament and the prior approval should come from the entirety of the House, not just the committee,” he added.

When there is absolute confusion about the fate of a nominee, the Executive may pick the signals and withdraw him or her.

Speaking to the Daily Graphic, the Majority Chief Whip, Mr Frank Annoh-Dompreh, expressed the hope that the Minority members of the committee would not put any impediments in the way of the President’s nominees during the vetting.

“The Minority is part of the governance structure and I do not think its intention is to impede our progress as a government or country. Let’s be focused on their strengths and find out if the person nominated has the capacity to deliver,” he said.