The La Magistrate Court has issued an arrest warrant for the Member of Parliament for Nhyiaeso, Dr Stephen Amoah over his failure to appear before the court for flouting road traffic regulations.

The lawmaker and six other drivers were arrested on Tuesday, December 7, 2021, around the Airport By-Pass during a Police operation to arrest drivers of V8 vehicles who were not complying with the Road Traffic Regulations.

A Police statement signed by the Director-General, Public Affairs, ACP Kwesi Ofori said of the seven, only Dr Amoah and another driver Samuel failed to appear before the court today.

Five of the suspect drivers appeared before the court where four, namely; Dominic Atuahene-Ababio, Daniel Boateng, Emmanuel Kofi Ofori and Joseph Brown were sentenced to pay a fine of One Thousand, Eight Hundred Cedis (GHC 1,800.00) each or in default serve three months prison terms. All four convicted drivers paid their fines.

Driver, Thomas Atinga, was convicted to sign a bond to be of good behaviour for three months or in default serve a three (3) months prison term.

The statement further directed all Police formations throughout the country to clamp down on recalcitrant drivers especially those who drive V8 vehicles.

"They (recalcitrant drivers) are cautioned to stop flouting Road Traffic Regulations or face the full rigour of the law if arrested," the statement said.

"We are determined to enforce the laws of the country and therefore urge the public to support us in this endeavour". 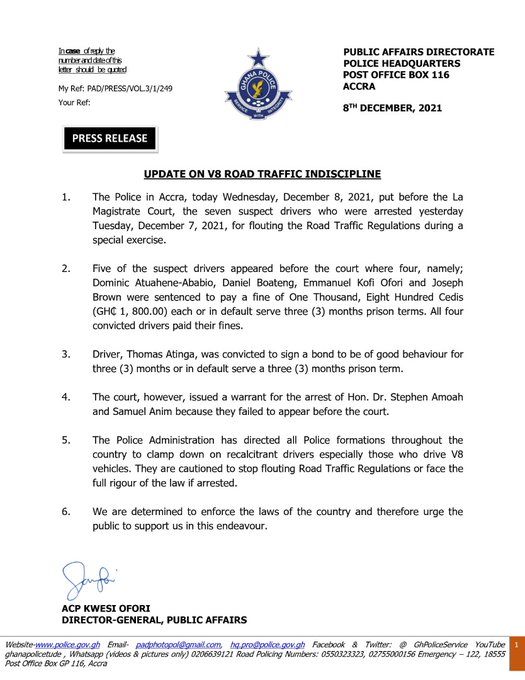