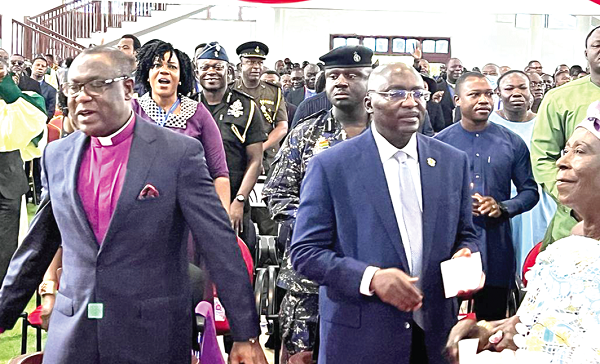 Dr Mahamudu Bawumia (right), the Vice-President, with Rev. Dr Ernest Adu-Gyamfi, Executive President of the Ghana Baptist Convention, at the 59th Annual Session of the church in Ejura
30.5k Shares

The Vice-President, Dr Mahamudu Bawumia, has said one of the key hindrances to fulfilling God’s purpose on earth is corruption.

"It also reduces tax revenue and the effectiveness of various financial assistance programmes. The wider society is influenced by a high degree of corruption, thereby lowering trust in the rule of law, governance and consequently the quality of life," he added.

The Vice-President was speaking at the 59th annual session of the Ghana Baptist Convention in Ejura in the Ashanti Region.

The session was on the theme: "Fulfilling God’s purpose, growing God’s church".

Dr Bawumia said since independence, governments had, by and large, not focused on building systems and institutions that underpinned economic activities in a modern economy.

"The systems that will reduce bribery and corruption, make the delivery of public services efficient, enhance domestic revenue mobilisation and make life generally easier for the people.

"So the whole issue of corruption is one that is enveloped with sin. We live in a society where this phenomenon is what we need to tackle.

The Vice-President further said in a society bedeviled with the canker, "one can even go and borrow money from a bank and later change his or her name and go to another bank to borrow”.

He said it was partly because of this that the government introduced the policy of digitalisation to address such challenges.

"Digitalisation is shining a light on the darkness of bribery and corruption. This government is building a system that will enhance transparency, promote accountability, discipline and trustworthiness and also enable inclusiveness," he added.

The Vice-President commended the Ghana Baptist Convention for its contribution to the development of the country, particularly in health and education, and mentioned the establishment of the Kumasi Academy, originally called the Saddler Baptist Secondary School.

"I would like to acknowledge the recent inauguration of a modern science laboratory at Kumasi Academy by the past students association of the school.

"I am told it is the largest and the best science laboratory in any secondary school in the country now. I hope that the Minister of Education will carry his promise through by adding Kumasi Academy to the STEM schools," he said.

Dr Bawumia added that the Baptist Vocational Training Centre had also been a beacon of hope for many ‘Trokosi’ and less-privileged girls.

He said the Baptist University, which recently held its 13th graduation ceremony, was a monumental testimony to the church's determination to provide tertiary education in a competitive and challenging financial environment.

"I was also privileged to have served as the guest of honour at the 60th anniversary and opening of new facilities at the Baptist Medical Centre in Nalerigu in the North East Region.

"I was particularly happy because it was my late father, Mumuni Bawumia, who persuaded the Baptist missionaries to set up the centre,” the Vice-President said.

According to him, the centre had been a major health facility for the people, including those from neighbouring Togo and Burkina Faso.

The Executive President of the Ghana Baptist Convention, Rev. Dr Ernest Adu-Gyamfi, who is also the Chairman of the National Peace Council, called for more collaboration between the church and the state for the accelerated development of the country.