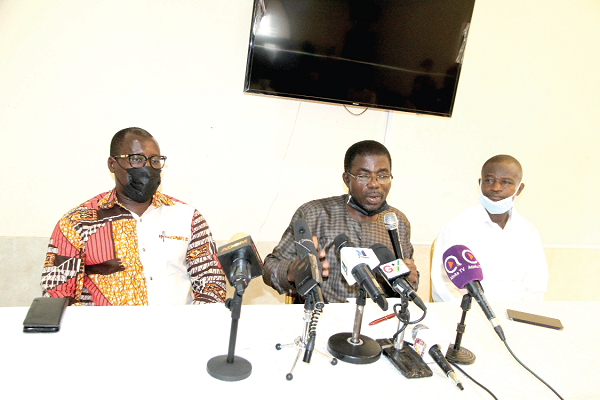 The Coalition of Muslim Organisations, Ghana (COMOG) has thrown its weight behind opposition against moves by the Lesbian, Gay, Bisexual, Transgender, Queer and Intersex (LGBTQI) community to establish a strong presence in the country.

It said it had given the Australia High Commissioner to Ghana, the Danish Ambassador and Head of the European Union (EU) delegation to Ghana seven days to apologise and assure Ghanaians that they  respected the country’s values, traditions, cultural and religious beliefs.

“Failure to adhere to the above call will spur the good people of Ghana to embark on a mammoth demonstration to signify our disagreement with their stance,” the  President of the Group, Mr Hajj Abdel Manan Abdel Rahman, who addressed the media at a press conference in Accra yesterday, said.

Mr Rahman said in the Genesis account in the Holy Bible and Chapter 7 verse 80-84 of the Holy Quran, the story was told of how Almighty Allah punished the people of Sodom and Gomorrah because men were satisfying their lusts with men and women also with women.

He said God’s wrath on the people showed his abhorrence of acts of homosexuality and other deviant and immoral acts.

Furthermore, he said, although the United Nations Convention on Human Rights, which was ratified by Ghana, protected the rights of Ghanaians the group would not agree with human rights activists who argued that the activities of the LGBTQI were hinged on human rights.

The President of COMOG said persons involved in the act needed holistic treatment to curb their “deviant feelings” and “unorthodox sexual tendencies”.

He has, under the circumstances, called on the government to support and work with the various religious groups, traditional bodies and health institutions to establish a centre to help LGBTQI persons and provide them with the needed treatments and counselling.

“We also call on Parliament to condemn the above named foreign missions in the country who are seeking to promote LGBTQI issues in the country, particularly when the practice is considered illegal as contained in the country’s statutes,” he added.

Mr Rahman also called on the public to rally behind the group to stop what he described as “an alien culture in our country”.

“Let us purge our country of this LGBTQI menace to merit and receive the pleasure and blessings of the Almighty God instead of his anger and punishment.

“As we urge Ghanaians to pray for God's intervention in this matter, we call on all Imams to use their pulpits to educate our youth and enjoin them to stay away from these abominable LGBTQI acts,” he said.