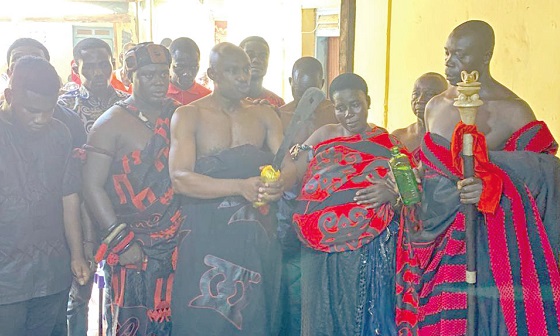 Nana Kumasah Krampah I (middle) declaring his allegiance to the throne and the people of Gomoa-Akyempim Traditional Council, Nifa Division
30.5k Shares

The newly installed Divisional Mankrado of the Gomoa-Akyempim Traditional Council, Nifa Division, Nana Kumasah Krampah I, has underscored the need for chiefs to spearhead development in their communities.

He said contrary to the notion that chieftaincy had lost its relevance, chiefs were the immediate drivers of development in their respective communities because they were legitimately selected by their people, hence the need for chiefs to assert their authority by spearheading development for their people.

“Chieftaincy has not lost its relevance in modern times; the only problem is that the older ways of doing things has changed.”

“Aside from adopting modern ways of doing things, if you are a chief and you sit down and you do not lobby or go out to look for development for your people, you are likely to lose your relevance,” Nana Krampah said in his remarks after he was installed at a ceremony in Gomoa Kumase in the Central Region.

The new Mankrado, who is also the Chief Executive Officer (CEO) of the Regency Group of Companies, is known in private life as Isaac Kweku Otchere.

The Mankrado is the one who assumes the reins of power in the absence of the chief of the town.

At a colourful ceremony in Gomoa-Kumase in the Central Region last Tuesday, he was led by the leadership of the traditional authority to swear his allegiance to the chiefs and people of the town at a grand durbar.

After swearing the oath of allegiance, libation and other rituals were performed for the installation of the Mankrado.

Thereafter, he went to the ceremonial grounds to dance to traditional music to the admiration of the gathering. Other chiefs took turns to perform traditional dances with traditional songs and drumming, and received applause from the crowd.

Highlighting some challenges facing the town, the Mankrado said their roads were in a terrible state, with no hospitals.
Nana Krampah explained that as a newly installed Mankrado, his first priority was to ensure that there was peace among chiefs in the traditional area, adding: “No development can go to any community where there is conflict. So, we will make sure we unite all the chiefs for the sole purpose of development”.

He added that as a farming community, he would lead the charge of educating the farmers on modern ways of farming, in order to ensure that farmers engaged in commercial agriculture to expand production.