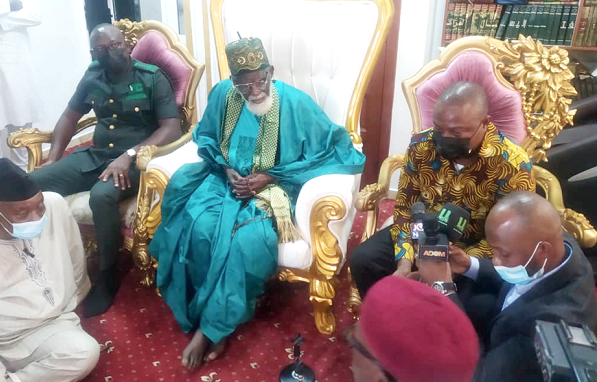 The National Chief Imam, Sheikh Osman Nuhu Sharubutu, has urged Ghanaians, irrespective of their religious beliefs, to come together to support the Green Ghana Project to plant five million trees on June 11.

"I approve and support this project. I, therefore, call on all Ghanaians, irrespective of whether you are a Muslim or Christian, to support the national effort to plant trees," the Chief Imam said through a translator.

He made the call when a delegation from the Forestry Commission, led by its Chief Executive, Mr John Allotey, called on him to formally invite him to join the national tree planting campaign slated for June 11.

As proof of his support for what he described as a laudable project, Sheikh Sharubutu gave the assurance that he would perform a symbolic planting of a tree at the new national mosque at Kawukudi, near Kanda, in Accra.

He said it was important that the environment was protected to fight off climate change that the world was experiencing, and thus encouraged the public to come together to participate in the exercise.

"Muslims and Christians are able to dialogue in Ghana, other nations do not have that, so we must be grateful to Allah and participate in this project in peace and harmony.

Mr Allotey said the commission would make the seedlings to be planted available to all Ghanaians at its regional and district offices located across the 16 regions of the country.

"A good proportion of the seedlings have been developed by the Forestry Commission already because that is what we do as part of our core mandate.

“However, when we have shortfalls in the regions, we will purchase to augment," Mr Allotey said, and indicated that the commission was in the process of awarding contracts to seedling providers after a regional audit of the seedlings.

Mr Allotey indicated also that four committees had been put in place to ensure transparency and effective execution of the project.

The separate committees, he said, would be in charge of monitoring, fundraising, operations and logistics, and publicity.

Meanwhile, the Monitoring Committee and the Forestry Commission are to ensure that the seedlings planted on June 11 are nurtured and protected from destruction.

"We don't want to throw away five million trees. The idea is to grow the trees and not just to plant them. So we will be monitoring them regularly to ensure they grow," Mr Allotey said.