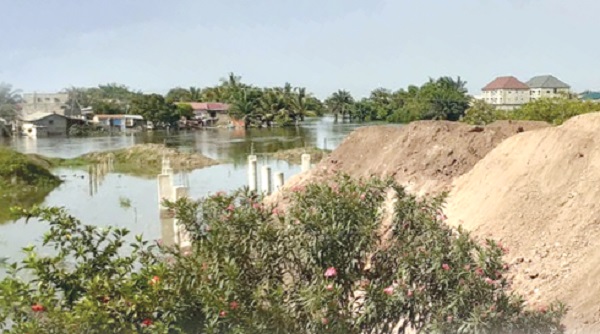 In spite of the danger flooding poses to human lives and property, some developers continue to engage in acts that could make an already bad situation worse.

Yesterday, during a tour of some areas that have been affected by two days of rain in Accra, particularly the Tetegu, Oblogo and Weija Dam catchment area, the Daily Graphic observed that a number of the water courses that had the water level still up had been further blocked by trips of sand left there by developers who seemed to be preparing for some kind of construction work.

That had left the water courses with pools of water from the flooding as a result of the torrential rains of last Tuesday and Wednesday, making commuting to and from those areas difficult.

That is not the only problem the flooding had created; it has also left in its trail filthy surroundings, heaps of refuse piled up in front of homes and debris scattered on some streets, waiting to be cleared and cleaned up.

Some residents of and business owners in some of the worst affected areas, such as Adabraka, Weija, Tetegu and its surrounding areas, are counting their losses while trying to salvage what is left of their personal effects that were affected by the flooding.

For the people within the Weija Dam catchment area, it was double jeopardy as they had to also deal with the impact of the spillage of the dam undertaken by the Ghana Water Company Limited, just days before the rains.

“Our poor or lack of proper waste disposal system is contributing, to a large extent, to the problem. Also, if drains have inadequate capacity, the way most of the drains we have are, water will definitely overflow their banks and make their way into buildings,” he said.

During the tour of some of the communities, including the Kwame Nkrumah Circle area, Odawna and Adabraka Official Town, it was observed that the level of flooding in the communities had subsided, although pools of water still remained in many homes and on access roads.

The situation was so bad that some homes had thick and large stretches of spirogyra developing on their compounds.

Also, some of the communities were badly littered with debris, with the drains, heavily silted, producing a very strong stench.

For easy movement, some people had put plywood on cement blocks to aid their movement in the homes.

People had also brought out their personal effects and gadgets to dry them.

Some residents who seemed displeased by their predicament decried the situation created by developers who contracted others to bring sand for their construction works.

“Most of the drivers bring in the sand and tip it anywhere, without being mindful of the fact that those areas are water coursess. When we see that, we try to draw their attention to it and the problem it could pose, but they just ignore our calls.

“This should engage the attention of the assembly and leaders, but, unfortunately, not much is done about it and we always have to bear the brunt when it rains,” a visibly upset Mr Nii Annan Anang told the Daily Graphic.

Despite the double risk of being affected by the rains and the periodic spillage from the Weija Dam, some residents of Oblogo, Tetegu and Weija were not looking to relocate.

“For some of us, it will be difficult to move out of our homes. Rather, we are taking precautionary measures to mitigate the impact. It is an inconvenience, but we don’t have the resources to move out completely,” one resident of Tetegu told the Daily Graphic.

“This is not to say that we do not value our lives; but this is where we have been living all these years,” a young resident who gave her name only as Akua said.

At Odawna and Official Town within Adabraka in the Korle Klottey municipality, an area frequently hit by flood disasters, many residents had brought out their personal effects and household items such as mattresses, clothes, furniture, among other things, to dry them.

The heaps of refuse mostly consisted of items that were damaged, such as carpets, bags and books, and they had placed such refuse in front of their houses, waiting for the refuse collectors to cart it away.

On the Graphic Road, where some showrooms, workshops and some offices of automobile companies were submerged in the floods, some workers were still cleaning the flooded offices and sending items that were not damaged to other offices which were not affected.

A resident of Odawna, called ThankGod, said he lost most of the items in his motorbike spare parts shop to the flood.

Asked why he still lived and operated within the vicinity, he said the area was a good business hub for his spare parts and so moving away would greatly affect his business.
“We are hoping that the authorities will take swift measures to permanently solve the flooding problem here at Odawna,” he said.

At the Odawna Clinic, a health centre within the Adabraka community, workers were seen scrubbing and drying out office chairs and other medical items.

An official of the clinic who was clearly not happy with the way flood issues were tackled in the country bemoaned the loss of properties in the community every year, saying yet nothing concrete had been done to resolve the situation.

The Public Relations Officer of the Korle Klottey Municipal Assembly (KoKMA), Nii Ofori Quaye, said the assembly would soon set up a voluntary disaster group to assist the National Disaster Management Organisation (NADMO) to monitor and sensitise community members to the need to avoid dumping refuse into drains and rather de-silt gutters.

“Currently, we have asked NADMO to assess the situation, so that we can find solutions to the problem. We have also directed our municipal environmental officers to clean and collect refuse within the community, which they have begun,” he said.

Mr Osei, who is also the past president of the International Association for Impact Assessment, Ghana (IAIA-GH) and former head of the Environmental Assessment and Audit Department of the Environmental Protection Agency, blamed the persistent annual flooding menace on the lack of a proper waste management system which resulted in most of the tonnes of waste generated finding its way into drains, watercourses and water bodies.

“Unfortunately, the already less capacity drains are also allowed to silt to about half or full their capacity, coupled with dumping refuse into them,” he stressed.

Mr Osei, currently the Chief Executive Officer of Green Advocacy Ghana, stressed the need for an impact assessment of the challenge in order to find a holistic and long-lasting solution to it.

He suggested the provision of adequate drains with huge capacities, fitted with silt traps, a proper network of drains, preventing people from building on water courses and along water bodies, among other solutions.

“Considering household underground rain water storage facilities for all new buildings could be of immense help. If many households are able to harvest and adequately store rain water beneath their buildings to be used for gardening, car washing, toilet flushing, among other non-consumable purposes, it will reduce drastically the amount of rain water in the environment and reduce the chances of flooding,” he added.

Mr Osei said the state could also build interceptor reservoirs to collect appreciable amounts of rain water at vantage points to reduce stress on drains and water bodies to reduce the impact or avert, if possible, some flooding situations.

He said such water harvested could be used for peri-urban farming and other commercial non-consumable purposes as well.

He also called for a stop to be put to the building of facilities such as houses along water bodies, explaining that the national water buffer policy should be implemented strictly because such margins also served as watercourses and helped prevent flooding, to some extent.