The Asuogyaman District Assembly in the Eastern Region has provided two 16-seater toilet facilities with urinals and mechanised boreholes to the Atimpoku and Dzidzorkope communities in the district.

The facilities for the two communities were funded by the District Assembly Common Fund and the Response Factor Grant.

A nine-member water and sanitation (WATSAN) committee for the Atimpoku community under the leadership of Emmanuel Adu Asare as the chairman was sworn in at the inauguration ceremony.

At the handing over of the projects to the beneficiary communities last Wednesday, the Asuogyaman District Chief Executive (DCE), Samuel Kwame Agyekum, pleaded with the people in the district to bear with the government, as times were difficult.

He said the government was aware that the economic conditions were difficult and the leadership of President Nana Addo Dankwa Akufo-Addo was doing all that would be possible to restore the economy in the interest of Ghanaians.

“Everybody is complaining of the present economic situation in the country. Yes, the government is aware and that is why the President and his team are doing everything possible to bring back the economy to its former status.

“During the COVID-19 era, the President did what was important to save lives, how much more the issue of the economy, which he has a way of solving? What we need to do as a country is to have faith in the Nana Addo Dankwa Akufo-Addo government and it shall be well,” he stated. 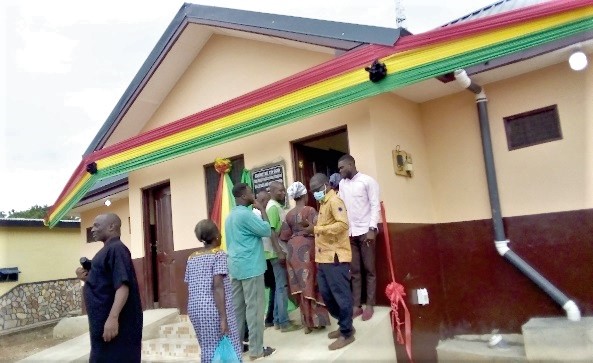 He said the toilet facilities provided were in line with the developmental agenda of the government and the assembly for that matter, adding “we have done enough in terms of education, health and other sectors and more are yet to be done for you.”

He also entreated the people of the Asuogyaman District to support the district assembly and the government to give them more of such development projects.

The Asuogyaman District Environmental Officer, Delordson Asafo, said the toilet facilities would go a long way to stop the open defecation that was going on in those communities and promote good sanitation and good health.

The Chief of Atimpoku, Nana Kwaku Budu Akomia V, who chaired the function was grateful to the assembly and the government for the projects.

He said it was not good for places like Atimpoku, the district capital, to experience open defecation and therefore lauded the assembly for providing the facilities to the beneficiary communities.

The assembly members for the Atimpoku and Dzidzorkope electoral areas, George Ampotia and David Tamakloe, respectively jointly assured the assembly they would join hands with the WATSAN committees to ensure the facilities were always maintained.