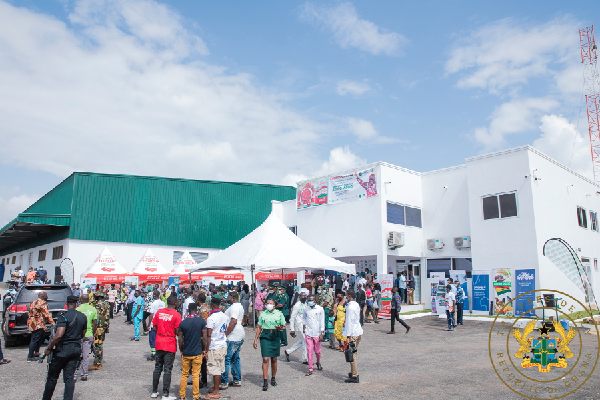 The tomato processing factory when it was commissioned
30.5k Shares

The Bono Region, described as the food basket of the country, was in the news for several good and bad reasons during 2021.

However, top events and incidents in the year under review were the Abesim killings, the demonstration staged by some residents of Sunyani to demand better social amenities for the region and the inauguration of a tomato processing factory at Domfete, near Berekum.

Friday, August 20, 2021 was a sad day for people in the Bono Region as they were hit with the news of the gruesome murder of three teenagers, allegedly by a 28-year-old draftsman, Richard Appiah at Alaska, a suburb of Abesim, near Sunyani.

What was more intriguing was the fact that the bodies of two of the victims were dismembered and kept in a fridge of the room of the alleged murderer.

The victims were identified as 12-year-old Louis Agyeman Junior, who is a step brother of Appiah, Stephen Sarpong, as well as a third victim.

The incident compelled the Inspector-General of Police, Mr George Akuffo Dampare, to lead a high-powered police delegation on Sunday August 21, 2021, to visit the scene of the crime.

The delegation also visited families of the victims at Abesim to commiserate with them.

Even though the alleged murderer has since been arrested and is currently facing prosecution in Accra, fear continues to grip residents of the region, particularly those within the Sunyani Municipality.

As if this incident was not enough, on May 17, 2021, a 21-year-old fashion designer, Benjamin Adjei, was busted for allegedly attempting to offer his 13-year-old nephew, Lawrence Adjei, for money rituals at Abesim.

The suspect was arrested with the help of an informant while on his way to sacrifice the young boy after luring him.

Again, on Tuesday June 8, 2021, a 27-year-old hairdresser, Hilda Asomani, allegedly stabbed her 30-year-old boyfriend, Prince Aboagye, to death at Abesim as a result of a misunderstanding between the two.

On Friday, December 10, 2021, some residents of Sunyani paraded the regional capital to express their displeasure with what they described as the slow pace of development projects in the area in particular and the entire region in general.

They cited the slow pace of the rehabilitation of the Sunyani Airport and the stalled Sunyani Library project, among others, as their reasons for the demonstration.

In a petition submitted to the Bono Region House of Chiefs, the demonstrators demanded the construction of a new sports stadium in Sunyani instead of the provision in the 2022 budget to rehabilitate the Sunyani Coronation Park.

In response to the demands of the demonstrators, the Bono Regional Minister, Ms Justina Owusu-Banahene, told the Regional House of Chiefs that the contractor rehabilitating the Sunyani Airport would hand over the phase one of the project by the end of January, 2022.

In addition, she explained that the rehabilitation of selected roads, adding up to 29 kilometres under the Sinohyro facility within Sunyani was progressing steadily.

They include a part of the Sunyani Inner Ring Road from the Fiapre Roundabout to the Jubilee Park Roundabout as well as the rehabilitation of the Dr Berko roads, among others.

It was not only bad news that hit people in the Bono Region in 2021 as the inauguration of a $16 million Weddi Africa Tomato Processing Factory at Domfete in the Berekum West District on August 10, 2021 by President Nana Addo Dankwa Akufo-Addo, brought hope to farmers in the region and beyond.

The facility, which is part of the government’s one-district, one-factory (1D1F) programme, is a wholly-owned Ghanaian company.

It has the capacity to process 40,000 tonnes of tomatoes a year into tomato concentrate, which translates into 720 crates of tomatoes per shift per day.

The factory has a 500-tonne cold room to hold fresh tomatoes from a 2,400-acre tomato farm, with a tomato out-grower farmers’ association made up of 2,000 registered and trained farmers from the Berekum area in the Bono Region and Tano North in the Ahafo Region.

Parts of the Bono, Bono East and Ahafo regions are known for large-scale tomato cultivation.

However, during glut periods, the farmers have to leave their produce to rot in the fields due to the lack of a ready market and storage facilities, resulting in post-harvest losses.

Weddi Africa Tomato Processing Factory is, therefore, positioned to significantly contribute to a reduction in post-harvest losses in the area.

The company’s beautifully-packaged tomato mix products, which come in sachets and plastic containers, christened: “Sweet Mama Tomato Mix”, are currently on the market.