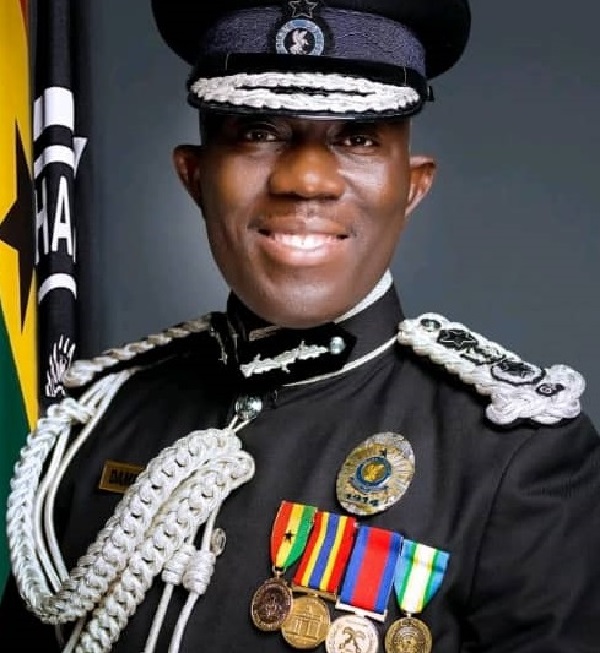 The highly publicised prophecies by some men of God that have characterised the start of every New Year in recent times were largely missing as Ghanaians welcomed 2022.

Many pastors noted for their prophecies on events and happenings within the year and whose words attracted media attention chose not to make their prophecies public, perhaps to avoid falling foul of the caution from the Ghana Police Service that any prophet or man of God whose utterances created fear and panic could face up to five years in prison.

The leadership of the Police Service, ahead of the December 31 watch-night services, during which the so-called prophecies were made, had advised religious bodies and the media that as much as they had freedom of worship, they should not tamper with other people’s freedoms.

“It is also a crime for a person, by means of electronic communications service, to knowingly send a communication that is false or misleading and likely to prejudice the efficiency of life-saving service or endanger the safety of any person,” the police had warned in a statement issued on Monday, December 27.

In regard of the directive, the tradition of ushering in the New Year with watch-night services on December 31, 2021 went on alright, but with messages of hope and restoration emanating from the pulpits, instead of prophecies.

The messages were similar, as preachers and speakers were confident that God would open the way for abundant blessings in 2022, after the country had survived a rather challenging 2021.

Across pulpits from the Orthodox to Charismatic through to the Pentecostal churches, messages of hope, restoration, unity, hard work and reliance on God resonated, urging their congregations to count themselves blessed to have crossed over into the new year.

Our reporters across the country who attended the services observed that with strict adherence to the coronavirus disease (COVID-19) protocols, mainly face-mask wearing, social distancing, with some of the services taking place outside the auditoriums, and washing of hands on arrival, most people who attended the services, clad in all-white outfits, celebrated with enthusiasm and jubilation as they counted down to the end of 2021 and welcomed 2022.

When it was a few minutes to end 2021, most congregations entered into a time of prayer, and on the stroke of midnight, 2022 was welcomed with shouts of joy.

From Kumasi, Emmanuel Baah reports that the Vice-President, Dr. Mahamudu Bawumia, attended three services as he joined Christians to usher in the new year.

Accompanied by his wife, Samira Bawumia, and some government officials, including the Minister of Parliamentary Affairs, Mr. Osei Kyei-Mensah-Bonsu; the Ashanti Regional Minister, Mr. Simon Osei-Mensah, and the Kumasi Metropolitan Chief Executive, Mr. Samuel Pyne, the Vice-President joined worshippers at the Breman Methodist Church, the St Peter's Cathedral Basilica and the Church of Pentecost at Ayigya at different times as the congregations prepared to cross over into 2022.

Dr. Bawumia was hopeful 2022 would bring better times for the country and stressed the need for Ghanaians to preserve the peace and unity the country enjoyed.

“In Ghana, we have what many others would long for: real peace, unity and religious tolerance. It is only in Ghana that a Muslim can join Christians to worship to usher in the new year, as I have done today. Let us not take that for granted,” he said.

He said Ghana continued to soldier on, in spite of its socio-economic challenges, heightened by the COVID-19 pandemic.

"The world has suffered a lot because of the pandemic. It has brought about the worst depression in the economic circumstances of the world since the 1930s”, he emphasised.

That notwithstanding, Dr. Bawumia stressed that with the strong foundation laid by the Akufo-Addo-led government, he was optimistic that this year would be a successful one and appealed to all religious bodies to continue to pray to God to continue to grant the President the wisdom to transform the country.

The Vice-President urged all religious bodies to continue to co-exist peacefully, saying that was a key ingredient needed to build a prosperous nation.

He said Ghana was touted the second most peaceful country in Africa and most peaceful in West Africa, and urged the people to continue to practise peace in the coming years and help guard that enviable accolade.

The Vice-President, who reminded the congregations of his youthful days when he was a member of the Boys Brigade (BB) of the Methodist Church, admitted that that helped to inculcate in him a sense of steadfastness and certainty.

In his sermon, the Superintendent Minister in charge of the Breman Methodist Church, the Very Rev. Benjamin Ansong, told Ghanaians to be positive and do away with negative thoughts and pronouncements.

He pointed out that a positive attitude and approach always yielded good results and urged the congregation and Ghanaians not to yield to negative talks of impossibilities but rather be encouraged by thoughts of possibilities.

No way for LGBTQ+

At the St Peter's Cathedral Basilica, the Most Rev. Gabriel Justice Yaw Anokye, the Archbishop of the Kumasi Archdiocese of the Catholic Church, urged Ghanaians to resist any attempt to promote, propagate or legalise same-sex activities in the country.

"We will resist this unGodly practice with our last blood,” he said.

However, he advised Ghanaians against putting the law into their own hands by molesting and attacking persons known to be in homosexual union, saying that such persons must be reported to the appropriate agencies.

Also from Kumasi, Daniel Kenu reports that at the Royal House Chapel, the Area Head, Rev. Robert Agyemang Webura, urged Ghanaians to be steadfast, as 2022 held the key to transforming societies, communities and the country if the citizenry aligned themselves to God.

"My prayer is that we will work together to defeat the coronavirus disease and be back here (auditorium) at the end of the year to thank God," he said.

The General Overseer of the Calvary Charismatic Centre at Ayigya in Kumasi, Rev. Ransford Obeng, charged Ghanaians to enter the new year fully aware that God was with them and as such there was nothing they could not do, reports Kwadwo Baffoe Donkor.

Rev Obeng said there was no prophetic word greater than one knowing that God was on one’s side.

Addressing the packed auditorium, with strict adherence to COVID-19 protocols, Rev Obeng said when the year started with the pandemic still wreaking havoc, no one knew “that we will get this far, but if God is with you, you don't need to be afraid”.

God has been good

In Sunyani, while the Orthodox churches held their watch-night services on their various premises, some of the pentecostal churches held open mass services to welcome the New Year, report Emmanuel Adu-Gyamera & Biiya Mukusah Ali.

At the Glory Congregation of the PCG, the Catechist, Mr. J.B. Nyamekye, urged Ghanaians put their trust in God in 2022.

Preaching on the theme: ‘Ebenezer, thus far has God brought us’, he said the Lord had been good to the country throughout 2021.

At the PCI, the Founder, Apostle Patrick Amoateng, advised Christians to move away from wickedness, lies and all forms of bad behaviour unworthy to be mentioned among the people of God.

Timothy Ngnenbe writes that the General Overseer of the Evangelical Church of Ghana (ECG), Rev. Maxwell K.K. Liwangol, said 2022 would be a year of restoration for the country, but that would require the citizenry to have positive mindsets at all levels of society.

In particular, he said, it was important for Ghanaians to do away with the pull-him-down attitude at the workplace, as that tendency was counter-productive and anti-developmental.

He urged people in positions of authority to recognise that they had been placed there by God to help the less-privileged in society.

Rev. Liwangol also underscored the need for young people to invest properly in their lives to reap the desired fruits.

At the Hope Congregation of the PCG at the Sakumono-Estates in the Tema West municipality in the Greater Accra Region, the watch-night service held outdoors attracted a large congregation, amid strict compliance with the COVID-19 safety protocols, reports Benjamin Xornam Glover.

Preaching on the theme: “Sound of abundance of rain”, the Resident Minister, Rev. Daniel Amoako Nyarko, said in 2022, God was telling everyone that there would be abundance of rain, adding that “we are not going to experience the suffering that people had in 2021 again, for God cares and He is always there for us”.

He encouraged the congregants to, in the new year, intensify their soul-winning efforts to bring more people into God’s kingdom.
At the Corpus Christi Catholic Church, also at the Sakumono Estates, worshippers thanked God for ushering them into the New Year.

From Ho, Jemima Achivors reports the New Year was heralded with appealing themes adopted by the various churches.

One such theme: “You will succeed, not by military might or your own strength but by my spirit”, culled from Zachariah 4:6, was central in the sermon at the Evangelical Presbyterian Church at Gbi-Wegbe in the Hohoe municipality.

Pastor Ernest S. Atsabe of the Ho Housing branch of the International Central Gospel Church led an anointing and communion service with a message to empower worshippers for 2022.

Preaching the sermon at the Christ Apostolic Church International, the Central-West Territorial Apostle, Apostle Emmanuel Osei Donkor, asked the congregants to be assured that God would be gracious towards them in 2022.

He said many Christians lived worried lives because they did not fully trust in God.

He admonished Christians to trust in God totally, knowing that the expectation of the righteous would not be cut off.

Mohammed Fugu reports from Tamale that Christians ushered in the new year with praises and worship at the various churches.

Some residents also poured onto the principal streets of the metropolis, making merry and displaying wild riding skills on their motorbikes.

Delivering a sermon on the theme: "Service to God" at the Kings Christian Ministry, the General Overseer of the church, Professor Bishop Albert Luguterah, urged Christians to contribute their quota to the development of the country by rendering services to God and humanity.

At the Sacred Heart Roman Catholic Church of the Tamale Archdiocese, Rev. Dr. Peter Anglaaere called on Christians to demonstrate the love of God, irrespective of their religious, ethnic, political and social affiliations, for peaceful coexistence.