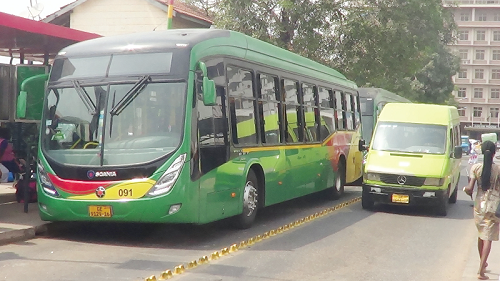 Under the Kufuor, Mills, Mahama and Akufo-Addo administrations, the implementation of the well-intentioned social intervention programme has moved at a snail’s pace.

The best effort so far has been a watered-down version of the BRT, christened the Quality Bus System (QBS).

Some experts have, however, described the QBS as an unreal reflection of the system because the buses operate like any ordinary commercial vehicle (trotro).
Operating under the brand Aayalolo, literally meaning, “we’re on our way” as a pilot project in 2016 under the Urban Transport Project (UTP), it was operated by the Greater Accra Passenger Transport Executive (GAPTE).

Unfortunately, that system could not serve its purpose as it plunged into many challenges a few months after it was launched.

The commencement of the pilot QBS in 2016 came with its own infrastructure, which included two kilometres of dedicated lanes on sections of the Achimota-Accra road and some contra-flows at the entrance of the central business district (CBD) of Accra.

The 45 buses for the pilot operated on the Accra-Achimota-Amasaman and the Accra-Kasoa routes, ferrying an average of 6,000 passengers daily.

Electronic tickets were also introduced to help create an uninterrupted payment system to ensure the collection of the right revenue.

The infrastructure was to make the QBS buses run faster by avoiding traffic congestion and other bottlenecks.

It was also to make the buses the most attractive means of public transport and discourage people from driving their private cars into the city centre.

Another objective was to discourage the patronage of trotros to and from the CBD and gradually get them out of the city, restricting their operations to peripheral areas of the city.

The objective is buttressed by the Chief Executive of Morning Star International School, Nana Yaa Pokua Siriboe, who questioned why trotros, almost all of which were rickety, were still allowed anywhere near the city centre, much more the CBD.“I don’t see why trotros should come further than the Pokuase interchange, for instance, and Mallam on the other side. They should be consigned to the peripheries while the BRT is allowed to take charge and function properly,” Nana Pokua told the Daily Graphic.

Transport experts explained that the trotros were to serve as feeder vehicles to convey passengers from the inner city onto the QBS terminals to reduce traffic congestion.

A source at the Urban Roads Department of the Ministry of Roads and Highways, who has been part of the technical team assisting the government to design an effective public transport system in the major cities in the country, told the Daily Graphic in an interview that the failure to roll out a sustainable public transport system was due to the lack of dedicated funding and the commitment of politicians who usually took the decisions.

Providing a background on the country’s efforts since 2005 to develop a sustainable public transport system, the source said the government’s objective was to increase productivity by limiting the number of hours spent in traffic.

It was also to limit the number of cars that plied roads in major cities, especially in Accra, to reduce congestion and cut down emissions.

According to the source, due to those objectives, governments considered the BRT system as the most suitable option to adopt.

“The World Bank came in to offer some support but it suggested that transport issues must be dealt with by the local government so there were consultations with the concerned district assemblies but somewhere along the line, the ministry was separated and as a result, roads and transport have never been together since then,” the source said.

Another challenge was the splitting of some of the district assemblies, which further delayed and compounded the situation, the source said.

The country has been looking for an efficient public transportation system since 1898 when the first rail line was constructed from Takoradi to Tarkwa.

The first road was created between Accra Harbour (now Jamestown) and Dodowa to Larteh in 1905 for the export of palm fruits.

In 1927, the Omnibus Services Authority (OSA) was established and it operated bus services in Accra, Kumasi, Sekondi–Takoradi and Obuasi.

The QBS, which was a downgrade of the BRT, has further been downgraded into an ordinary high occupancy passenger bus service. It only beats the trotro with the comfort that comes with the spacious ambience of the buses.

Some groups and churches also hire the buses for intercity carting of members to and from event grounds.

While authorities continue to experiment to find a suitable system to manage public transportation, the traffic congestion in Accra in particular, keeps mounting in alarming dimensions.

During weekdays, traffic congestion in the city occurs within the rush hours of 6 a.m. and 11:30 a.m and around 3:30 p.m. to 8:30 p.m. — sometimes earlier during both periods — compelling commuters to waste away productive hours in vehicles.

In some instances, when the gridlock becomes unbearable, some commuters are forced to walk from the various lorry stations to their destinations, a very common sight in the market centres such as the central business district.

The sight of commuters trekking along the shoulders of roads in the city is also common after downpours when the traffic congestion usually worsens.

The harrowing traffic situation, according to many commuters, is due to the absence of a reliable public transport system, which has compelled many people to rely on their private vehicles.

The number of passenger cars registered in the region was almost 1.25 million in 2017 (or 60 per cent of the national registration), with an average annual increase of 8.4 per cent over the past 10 years.

“People would have parked their cars to ride in a good public transport that can guarantee comfort and safety,” a student of the Accra Technical University, Ms Ama Asabea Bonsu, told the Daily Graphic in an interview.

To her, people would continue to drive their private cars even in gridlocks because public transportation in the city is unreliable and not effectively managed.

She observed that people with the means to buy their own cars were not interested in patronising public transportation because most of the vans used for commercial purposes, popularly called, ‘trotros’ for instance, were rickety and their services unreliable.

Another student, Mr Richard Agbozo, who also resides in Kasoa, a sprawling community on the outskirts of Accra, also told the Daily Graphic that he used to patronise the Aayalolo buses until it stopped running its schedules.

He said his electronic ticket card still had unspent money loaded on it, although he could not use it to access the buses.

“Even right now, years after the system broke down, I still have my card (e-ticket) in my wallet and there is money on it that I can’t get access to for no fault of mine,” he said.

However, Mr Agbozo noted that the service that Aayalolo provided was better than all the offers provided by players in the transport space at the moment.

He expressed optimism that people would patronise a similar service if it became available.

The Communications Manager of GAPTE, Mr Fred Chidi, told the Daily Graphic in an interview that the BRT system did not live up to expectation basically because there was limited financial commitment to the project by the government.

It was also due to a lack of enforcement of regulations on the dedicated lanes and the use of the contraflows.

Contraflow is a method designed to increase the capacity of transportation roads towards a certain direction by reversing the opposite direction of road segments. Incoming lanes are reversed to an outbound direction from an affected area of congestion to increase the efficiency of traffic movement.

When contraflow is implemented on a road network, a significant amount of resources is required in terms of manpower and safety facilities.
Contraflow needs to take into account other factors from the perspectives of planning, design and operation, among others.

“Everywhere in the world, BRT is subsidised by the state because it provides a social service. It is the same in Lagos as the Lagos Metropolitan Area Transport Authority (LAMATA) ensures that the system keeps running,” Mr Chidi said.

He added that Aayalolo was running like every other private transport company, “operating in the same space as others, competing for the same market and buying fuel at the normal market price.

“It is not possible to run a BRT like that,” he said.

For the system to work, Mr Chidi said the state must provide and enforce strict regulations on the use of the dedicated lanes reserved for the BRT.

“A proper BRT needs to have a dedicated lane from the beginning to the end of its route without interference,” the communications manager of GAPTE said.

According to the source at the Urban Roads Department of the Ministry of Roads and Highways, the country’s best chance at having an effective public transport system such as the BRT was to adopt a three-way solution.

There must be a separate body to regulate activities in the public transportation services space, bring together all the private transport operators and develop the infrastructure that would aid the operation of the BRT.

“If we don’t have the three solutions in place, we will not be successful. The regulator will ensure all the players providing the services bid for a route so that when Aayalolo or a different company wins a particular BRT route, they alone will operate on it for a period,” the source at the Ministry of Roads and Highways suggested.

That would also ensure that most of the trotros were taken off the roads, while those private sector players brought in bigger buses and joined the BRT.

In a separate interview, the Minister of Roads and Highways, Mr Kwasi Amoako Attah, told the Daily Graphic that the government was considering introducing the tram system in the major cities in the country to help reduce traffic congestion and provide an alternative source of city transportation.

This is a type of a train that runs on tramways on public urban streets; some include segments of segregated right-of-way.

Mr Amoako Attah said a pilot project would soon start in Kumasi after negotiations with the Ministries of Transport, Railways Development and Roads and Highways with a consortium from the Czech Republic that had already finished feasibility studies on the project were concluded.

Meanwhile, an environmentalist and Executive Director of Green Advocacy Ghana, Mr Amoyaw Osei, has stressed the importance for the government to adopt a more sustainable public transportation system that focused on environmental sustainability.

“This will require the redesign of some of the roads in the city to accommodate other modes of transportation such as bicycles, and ensure that there is room for pedestrians’ walkways,” he said.

He noted that air pollution levels were higher in urban settings that prioritised road transport over pedestrians and cyclists.

“If we go green and encourage the use of bicycles, for instance, we may even start the manufacturing of bicycles in the country, and that will be an economic benefit aside from all the health benefits. So that is an area we can explore,” he said.