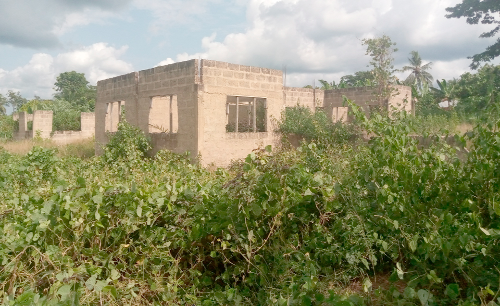 A section of the uncompleted CHPS compound at Asuogya Zevor

The construction of a Community Health Planning and Services (CHPS) compound at Asuogya Zevor, a community in the Akyemansa District of the Eastern Region, has stalled.

In view of that, members of the community have for over 15 years been accessing health care from a two-bedroom house provided by an opinion leader in the area.

The CHPS project, which started in August 2016 with the support of the Akyemansa Assembly to improve healthcare delivery in the area, has now been taken over by weeds and has also become the breeding ground for snakes.

When completed, the CHPS compound is expected to have a maternity ward, antenatal room, reception, consultation room, dispensary, and toilet facility to help in the healthcare needs of eight communities in the Akyemansa District.

It also has two residential apartments for resident nurses, but has been left at the mercy of the weather.

In an interview with the opinion leader, Mr Japheth Anani Gablah, who donated his two- bedroom house to be used as a CHPS compound, he lamented the health situation in the area.

Mr Gablah said he was compelled to give out his two-bedroom house to be used for healthcare delivery because he could not stand the difficulties some of the residents had to go through to get to the nearest town with a health centre.

He explained that the community members used to walk for several kilometres to Anyinase, a nearby town, to access health care.

Mr Gablah lamented that since his home was turned into a health centre and he no longer had access to the place, the assembly saw it as one of their properties.

He said in spite of that, the assembly had not been keen on doing any maintenance work on the facility, and all the burden had been left on the shoulders of the community members.

He also said accommodation for the nurses posted to the area had been left on him and that the health personnel had been residing in his home without paying rent for over 15 years.

Mr Gablah threatened to take back his building, and accused the assembly of using his home as a cushion of hope, leaving the uncompleted project unattended to since 2017.

In an interview with the Daily Graphic, the Assembly Member of Asuogya Zevor, Mr Isaac Tomokossi, said the project had always been the heart of discussion during assembly meetings, but nothing had been done about it even though the district chief executive visited the facility.

On why the place had not been kept tidy, he explained that he led the youth in the community to clear the overgrown bushes at the site on several occasions based on promises made by the assembly to continue the project, but that never materialised.

The situation, he said, had made the youth lose confidence and had declined to help clear the bushes at the project site anytime they were called upon.

He appealed to the assembly to complete the project which would serve eight communities in his electoral area including, Asuogya Zevor, Ayeboafo 1 and 2, Bekawpa, Kwasi Awuah, Camp, Camp Junction and Akyekrom, to improve healthcare delivery in the area.

Mr Tomokossi lamented that the space at the current facility, which had been divided into "Out patients Department, Family Planning Centre, and Antenatal Ward" with two resident nurses did not meet the required standard, hence the need to complete the abandoned project.

He said the situation was similar at the Akyekrom CHPS compound, another community in his electoral area. According to him, the said facility which the Daily Graphic visited, was a corn mill facility that had been turned into a two-room CHPS compound.

He appealed to the assembly to also provide a means of transportation for the three nurses serving at the two improvised CHPS facilities, who as part of their duty, had to travel frequently to other communities to render services at great transportation cost by commercial motorcycle riders popularly known as "Okada", because it is the only available means of transport.