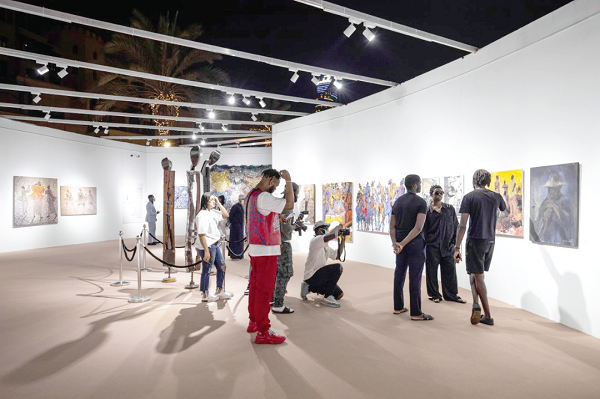 A new gallery that specialises in the promotion of African arts from within the continent and the Diaspora, has been officially opened in Dubai.

Efiɛ Gallery, a contemporary art gallery, represents both established and emerging African artists and supports the sharing of their works in the Middle East, creating a unique platform for collaboration and exchange between the two regions.

It was launched during the All Africa Festival which took place in Burj Park, Downtown, Dubai.

Efiɛ Gallery is currently located in a dedicated arts pavilion at the Burj Plaza that has been specially designed by the Ghanaian architect, Alice Asafu-Adjaye, for its launch.

The gallery will, however, be moved subsequently to its permanent location in Dubai, on a date to be announced soon.

For its debut exhibition, Efiɛ Gallery showcased three new art pieces of the renowned and award-winning Ghanaian artist, El Anatsui, who is known for his large-scale sculptures composed of thousands of folded and crumpled pieces of metal.

El Anatsui shared the space with impressive works by 20 contemporary artists from Africa and its Diaspora.

Afia Owusu-Afriyie, one of the gallery’s curators, explained that Dubai was a good choice, not only because of its location as a global hub but also because there was a gap in the market that needed to be filled.

Efiɛ Gallery was founded by Valentina Mintah, with her sons, Kobi Mintah, a photographer and filmmaker whose works are also in the current exhibition, and Kwame Nsiah Adomako Mintah, a young art collector and university student.

Both are also involved as curators of the gallery.

Kwame Mintah explained that the gallery’s goals were to broaden notions around what constituted African art and also ensure its longevity, saying: “When people think of African art, they think of masks or traditional works.

Going forward, we want to change the perception of what African art could be.”

Ms Valentina Mintah said: “We don’t want African art to be an afterthought.

We want it to blossom with the art scene here.”

She added that the nascence of the local art market meant there was more room to grow.

If you go to cities like London, it’s very difficult to innovate,” she said.

“Until recently, African art was almost seen as a charity. We want to show art not just as a charitable gesture.

Yes, that might exist as arts and crafts, but we want to change the stereotype”, she said.

Ms Minta said, “African art has existed like any other in more mature markets.

While the art scene in the West was developing, so it was in Africa, too, but it was not amplified or celebrated by the media.

Because there was a vacuum, stereotypes grow”.

She is also the founder of e-Ananse Libraries, a new model of a public library, deeply rooted in Ghanaian, black and African culture.