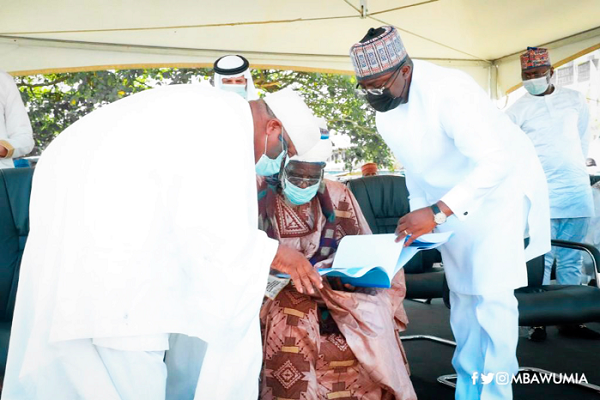 Dr Mahamudu Bawumia being assisted by Sheikh Mustapha Ibrahim (left), one of the muslim leaders, to show the building plan of the new mosque promised by the Vice-President to Sheikh Osman Nuhu Sharubutu, the National Chief Imam
30.5k Shares

The Vice-President, Dr Mahamudu Bawumia, has emphasised that education remains one of the important tools which Muslims can use to develop their communities.

He has, therefore, urged Muslims to prioritise education, especially in these times of technological competition, to be able to transform their communities.

Dr Bawumia gave the advice at the closing session of this year’s Tasfir by the National Chief Imam, Sheik Osman Nuhu Sharubutu, at the Central Mosque at Abossey Okai in Accra, last Saturday, and stressed that education was a right and, therefore, a must for all young Muslims.

The event, which was part of activities to herald this year’s Ramadan, attracted members of the diplomatic corps, heads of the security services and ministers of state.

The Tasfir is one of the oldest and biggest platforms in the country for the recital and interpretation of complex verses of the holy Quran, and it underlines the significance of information and education in Muslim communities.

It is also one of the oldest methods of seeking knowledge.

This year’s event was dubbed: “Promoting education for the benefit of the community”.

Dr Bawumia said the sheikhs envisaged education many years ago, hence the setting up of the learning institutions (Makaranta), in their own small ways, for free.

He said those Muslim elders cherished education, looking at what they did many years ago, and so the young ones had no reason not to prioritise education today, as beneficiaries of the knowledge of the sheikhs.

He, therefore, commended the Chief Imam and other Muslim scholars for continuously using such occasions to educate the followers.

The Vice-President said the government appreciated the importance of education and its impact on the nation, hence the massive development in the sector, as well as the decentralisation of the scholarship application process.

He said the performance of Ghana in the recent West African Senior School Certificate Examination (WASSCE) was enough testimony that, if for nothing at all, the free senior high school (SHS) policy had improved the quality of education in the country.

“The WAEC results showed that, of the total number of 465 students who got A in all subjects, 411 came from Ghana, and the other 54 came from Nigeria who were 70 per cent of all the students who participated in the exam. That tells you the quality that we have produced. We should not underestimate what we are capable of and what we have achieved. The free SHS is beneficial to both the students and parents,” Dr Bawumia stressed. He said beyond the provision of infrastructure and more access to education, the government had also provided scholarships to students in Zongo communities.

He said last year, 40 needy brilliant students from the Zongo communities were offered scholarships to go to Cuba to study medicine.

He said same would be done this year and years to come to build deprived communities and the people.

“We will continue to prioritise education in deprived communities, and it is for this reason the government has planned to build 16 model SHSs in all Zongo communities,” he stated, saying the project would begin this year, with the first three schools sited in the south, the middle and the northern zones.

The Vice-President advised young Muslims to assist the elders to set up digital platforms to be used to educate the people to positively impact the communities.

Dr Bawumia also promised to rebuild the Central Mosque in honour of National Chief Imam, and said a similar refurbishment was taking place at the Kumasi Central Mosque.

The Greater Accra Regional Minister, Mr Henry Quartey, paid tribute to Sheikh Sharubutu for his peaceful nature, which, he said, had brought people of different faiths together in the country.

He urged the youth to leave a legacy in their communities by inspiring and motivating the people, and cautioned them against reckless motorcycle riding that could endanger their lives and limbs.

He also advised Muslim youth to continue to observe the covid-19 protocols and keep their communities clean as they marked the Ramadan.