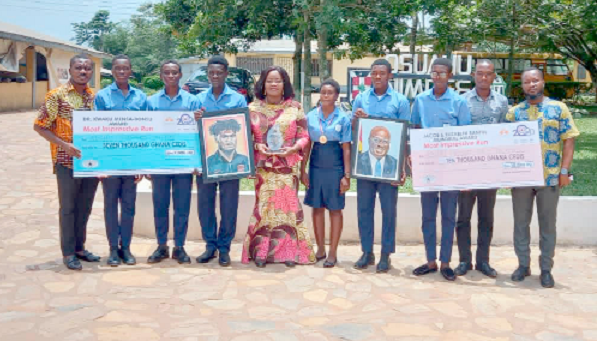 • The contestants with their award winning paintings

The Presbyterian Senior High Technical School (PSHTS) at Aburi in the Eastern Region is an offshoot of the then Aburi Amanfo Boarding School, which was an experimental school in 1991.

Young though the school may be, it has proven to be one of the best in recent times in the sphere of academic excellence in its 30 years of existence.

In spite of the numerous challenges, the school has chalked up remarkable successes in recent times at both local and national level. But for the power of television, many Ghanaians would not have known about the school.

Indeed, its outstanding performance at the 2020 National Science and Maths Quiz competition, organised annually by the Primetime Company Limited and supported by the Ghana Education Service (GES), shot the school into prominence.

Through the support of the Conference of Heads of Assisted Secondary Schools (CHASS), the PSHTS reached the semi-final stage, a feat which surprised many. It is worth mentioning that the school made it to the quarter final in 2016, with its first appearance at the competition - a level of success most schools endowed with infrastructure and academic resources are still struggling to reach.

Having recognised the school and acknowledged her outstanding performance, the All Nations University - Space System Technology Laboratory last year invited the students to participate in the third SHS Research and Power Point Presentation Competition 2021.

The competition was organised from March 8-10, 2021 and sought to initiate classroom - industry reconciliation by exposing students to the world of work and the practical application of the knowledge acquired in the classroom for effective problem solving.

The school participated in the General Science and Visual Arts categories with Miss Richealle Asantewaa Agyekum being adjudged the “Most Promising Science Research Presenter” in the Science category after she made an awesome presentation on “Internet of Things” (IOT).

She was supported by Miss Christalove Dwumor Nyamekye and Master Elikem Mensah.

It also won the overall best in the Visual Art category with Daniel Boffour Yasmah, Emmanuel Owusu and Japheth Tetteh, representing the school.

The trio were made to draw the portrait of President Nana Addo-Dankwa Akufo-Addo and Thomas Teye Partey, a renowned Ghanaian footballer.

“Students and lecturers of All Nations University trooped from their lecture halls and offices to catch a glimpse of these beautiful pieces of arts. It was not a surprise to many who witnessed this grand display of talent and creativity.”

“The 2020 West African Senior School Certificate Examination results saw improvement as compared to that of 2019, with a student, Dugboryele Prince Kojo, getting eight A1s; Bonney Samuel Nii Awuley, seven  A1s and a B2 and Addy Samuel Tetteh-Tsuru and Amabea Monica, five A1s and 2 B2s,” the headmistress of the school, Mrs Joyce Appiah, told the Daily Graphic.

She said the success of the school was made possible through the hard work of the staff and her management, adding that the PSHTS had become a school of choice on the Akuapem ridge.

“We say ‘ayekoo’ to the students and bravo to the Board of Governors, Management and staff of Presbyterian Senior High Technical School, Aburi, for such a sterling performance,” she added.

She said although the school had been performing creditably on the academic front, there were some challenges to academic progress in the school.

Mrs Appiah, therefore, urged other stakeholders and philanthropists to assist the school in resolving its infrastructural needs, especially classroom and staff accommodation and that when given the opportunity it would be one of the best in the country.