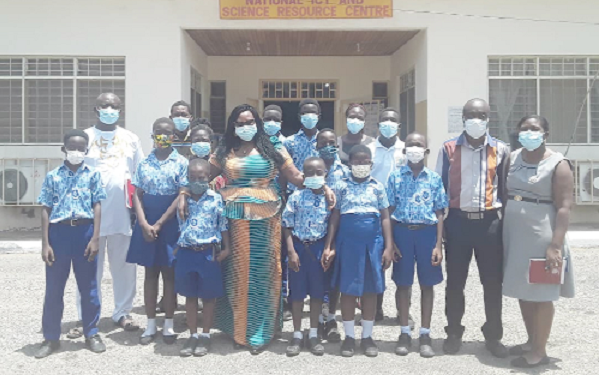 Mrs Olivia Serwaa Opare, Director of Science Education of the Ghana Education Service with the contestants and management of the school
30.5k Shares

Winners of the world robotics competition in the CoderZ League Sprint Challenge have paid a courtesy call on the Director of Science Education of the Ghana Education Service, Mrs Olivia Serwaa Opare, to introduce themselves to the directorate.

The winners, from the EKIS Montessori School, at Pokuase, Mayera Dunyo in the Ga West Municipality in the Greater Accra Region, took part in the international virtual competition designed to engage students with exciting challenges and opportunities to work collaboratively in teams.

The winners were accompanied by the proprietor and proprietress of the School, Mr Elvis Kwasi Ofori Boateng and Mrs Georgina Boateng, respectively as well as the information and communications technology (ICT) teacher of the school, Mr Joseph Amegatcher.

The teams played against other teams to get the highest score by completing a series of missions and challenges.

The goal of each team was to get the highest score possible on all missions and challenges to accumulate the most points.

The school, which entered the competition in the novice division meant for Grades Four to Seven, presented two teams: the EKIS STARS and NYANSAPO.

Mrs Opare was full of praises for the pupils for winning the competition, saying their effort had raised the image of Ghana in the science, technology, engineering and mathematics (STEM) education.

She reminded the pupils that in STEM education, “we build on attitude in team work,” and advised them to keep it up.

Mrs Opare said such competitions opened up the minds of the children and improved their critical thinking capabilities.

Responding, Mr Boateng said the school prioritised the teaching and learning of coding (programming) and robotics which was a departure from the normal school syllabus.

“This is inspired by the new trend in identifying talents in young schoolchildren and the desire to prepare them for the future and the labour market,” he explained.