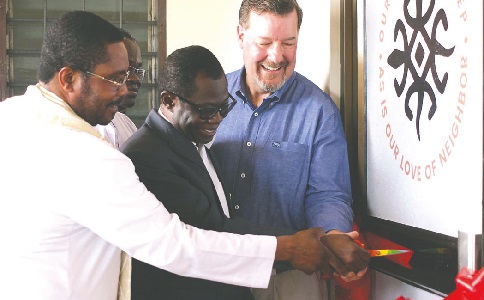 A religious research entity, The Sanneh Institute, has inaugurated a new library to engender peaceful coexistence among religious bodies.

The library, which was named after the late Prof. Lamin Sanneh, is a specialised reference and online resource centre for the advanced study of Islam and Christianity.

The new edifice is geared at promoting a base for educating young leaders, students and residents of the community on the teachings and theology of religions.

The Sanneh Library is made up of a collection of about 5,000 books used and donated by Prof. Sanneh, which includes his published monographs, articles, and unpublished papers among other books such as the History of Islam, History of Christianity, Christian and Islamic Theology, all of which were written by authors of diverse religious backgrounds.

The facility has a spacious seating area with books carefully arranged and labelled on the shelves to aid its users to have a good reading and workspace.

The Executive Director for Sanneh Institute, Prof. John Azumah, said the library was carefully selected, with reference books which when fully stocked, would make it one of the leading libraries for research into Islam and Christianity in West Africa.

He mentioned that educational engagements such as the library would spread inter-religious tolerance in Africa to break down the religious stereotypes and hatred which existed in Africa as they were mostly grounded on ignorance and needed education to erase.

The Board Chair of the Sanneh Institute, Prof. Kwame Offei, said the library was a repository of Christian and Islam books where people who specialised in the areas of theology would get access to more information to build on their knowledge and research.

He mentioned that the facility was also open to students in the various universities in and outside the country for their research.

Prof. Offei added that the institute through the library was working towards bridging the Christianity and Islam gap in the hope of peaceful coexistence.

The President Emeritus for the Institute for Global Engagement, Dr Chris Seiple, who represented the Lamin Sanneh family at the event, commended the institute on the opening of the library, which was in honour of the life of the late professor.

He said the library would also prepare people to live as Prof. Lamin Sammeh did, where they did not only love their neighbour but also saw their identity rooted in their neighbour as was taught in the gospel and as he lived.