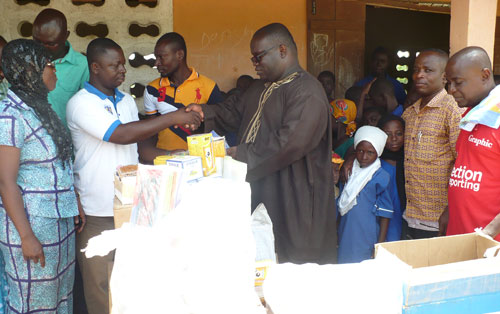 As part of its Corporate Social Responsibility Programme to support deprived schools in northern Ghana, the Graphic Communications Group Limited (GCGL) has donated education materials to Ibn Baz Primary School at Chanshegu, a suburb of Tamale.

The materials were chalk, erasers, pens, pencils, exercise and textbooks. The items are expected to help improve teaching and learning in the school.

The Managing Director of the GCGL,Mr Kenneth Ashigbey, who donated the items, pledged the commitment of the company towards the improvement of education in deprived schools. He equally expressed concern about the poor state of infrastructure at the school and promised to link the school to public-spirited individuals and organisations to address their problems.

He was particularly worried that the pupils of the school were facing numerous challenges and were expected to compete with their counterparts in well-endowed schools in the country.


"How can these pupils compete with those in Accra and other big cities? In fact this is not fair," the MD expressed regret.

The Lamashegu B Circuit Supervisor, Mr Mugisu Abubakari, thanked the company for the gesture and noted that the items had come at the right time.

The head teacher of the school, Mr Adam Shahanun, for his part observed that the school enjoyed some capitation grant but noted that the facility was woefully inadequate to address the numerous development challenges facing the school.

The Ibn Baz school was established in 2009 and was absorbed into the public system in 2011. The pupil population is 200, while the teaching staff is seven, including a lady.

Apart from Chanshegu, where the school is located, it also serves such communities as Dohani, Zugyung and Nankpanzoo, all suburbs of Tamale.

In a related development, the General Manager, Newspapers of the GCGL, Mr Yaw Boadu Ayeboafoh, has donated some education items on behalf of the company to the Bright Star Academy also located near the Ibn Baz Primary at Chanshegu.

The academy, which is a private initiative to support education in the area, is grappling with so many challenges. The school has only two dilapidated structures housing pupils for only nurseries one and two.