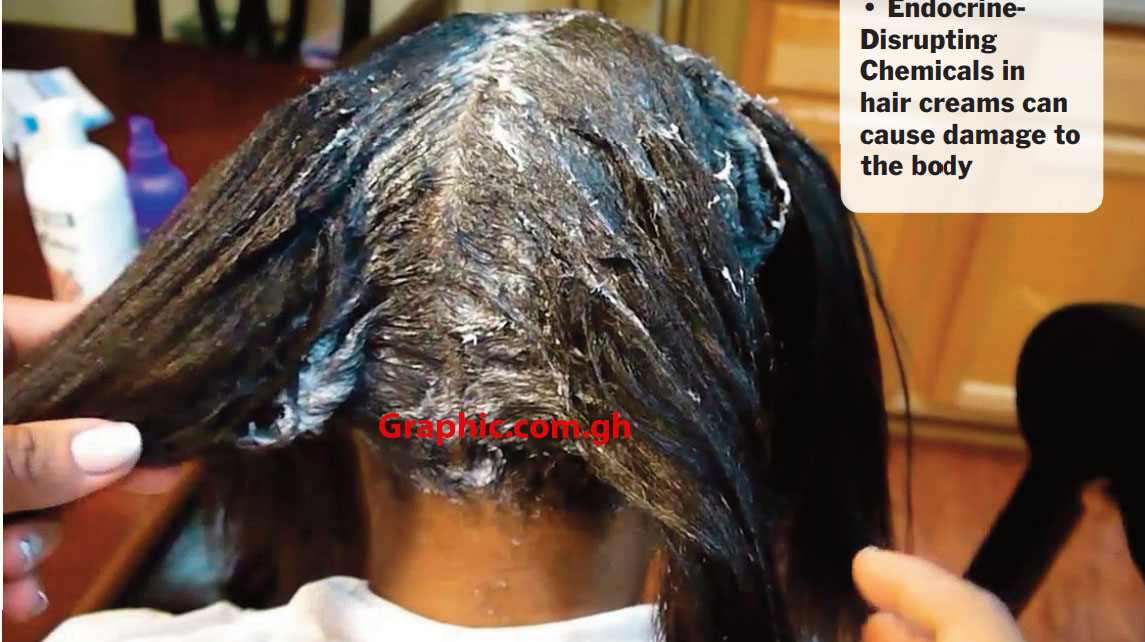 African women and women of African descent who use hair straightening creams and lotions on their hair stand a higher risk of developing fibroid and cancers of the female genital tract which can lead to infertility, says Professor Agyeman Badu Akosa, a cellular Pathologist and Lifestyle Wellness consultant.

According to Prof. Akosa, a lot of the hair straightening creams contained Endocrine-Disrupting Chemicals (EDCs) which tended to destroy the female endocrine system, including the hormones, oestrogen, projections and follicles.

In an interview with The Mirror in Accra, Prof. Akosa said, “I am not a beautician, but I can tell you that a lot of the fibroids we are getting is as a result of these straightening creams women have been using.

What is risky is that these straightening products are applied to the hair of children. You may want your daughter to look good, but the end result is devastating.

Fibroids in the Black race continue to grow among African women or women of African descent over the years. At age 25, a lot of women are getting fibroids, and that is a cause for worry.”

EDCs are substances in the environment (air, soil or water supply), food sources, personal care products and manufactured products that interfere with the normal function of the body’s endocrine system.

Some hair care products which contain EDCs are hair lotions and relaxers for especially children, and shampoo which contains chemicals such as cyclosiloxanes, parabens, fragrance marker diethyl phthalate (DEP), benzophenones and bisphenols.

“Somehow, all Africans have come to accept that our natural hair is not beautiful. Most Africans or women of African descent have had to apply straightening creams to their natural hair to straighten it up and that is dangerous because these creams are harsh.

“In Ghana, we are also putting together some data that makes these revelations, and very soon, this will be out. But the findings are not different from the impact it has on all Black women,” he added.

The Chief Executive Officer of 2nd Image International Skills College, a cosmetology school, Madam Nikki Boamponsem, admitted that the wrong application of hair creams and lotions tended to affect the scalp of users, which could lead to brain damages and total loss of hair.

However, she could not state whether the long-term effect of hair creams could lead to bigger complications among women.

“What I know is that the creams affect the hair due to the chemicals used in making these products. So the continuous use and its wrong application can lead to problems. When these creams get to the scalp, they travel to the bloodstream and that can be dangerous.

“A lot of the hairdressers in town do not have much knowledge about these creams and tend to apply them anyhow, and that is the danger,” she said.

Madam Boamponsem said in spite of the education on how to minimise the application of chemical hair creams, it appeared the public did not care about the situation.

A hairdresser at Kaneshie, Ms Deborah Nunoo, who has been operating for the past 15 years, told The Mirror that she was aware of the dangers hair creams posed to people, noting that she usually advised her clients not to overuse them.

“I also think many of my colleagues do not know how to use the creams, so people must be alert,” she said. Augustina is the owner of Pious 1Z barbering and hairdressing salon at Adabraka. According to her, none of her clients had complained of any serious complications related to using hair relaxers.

Madam Vivian and Deborah Akonnor also told this reporter that they were not aware that hair creams could cause fibroids or any serious complications.

“This is the first time I am hearing of something like this. I have no idea about it. Moreover, my customers do not complain about any complications for using hair creams,” Deborah said.

As much as possible, the pathologist suggested that women should maintain their natural hair and avoid the use of straighteners. “It is important we find an antidote to this as soon as practicable.

Otherwise, the age at which people get the fibroids will grow younger and younger, and the age at which African women develop cancers of the female genital tract will also grow among young women.

Even though he could not recommend any particular cream for the hair, he advised the public to be particular about whatever they used on their body as that could pose danger to them.

“Manufacturers of these hair creams should be compelled to label all the ingredients found in creams and the dangers that they could pose to users to inform purchase decision,” he emphasised.

Some studies done in 2018 in Europe proved that hair products for Black women contained mixtures of EDCs, while hair relaxers for children contained regulated or restricted chemicals.

A 2016 study in the United States of America (USA) also found that the rate of breast cancer among African-American women had recently converged with that of non-Hispanic White women in the United States, although African-Americans had a higher mortality rate from cancer. Similarly, a 2018 study organised among Black American women showed that personal care products contained EDCs and asthma-associated chemicals which were dangerous for human use.

Read more details in the documents attached below