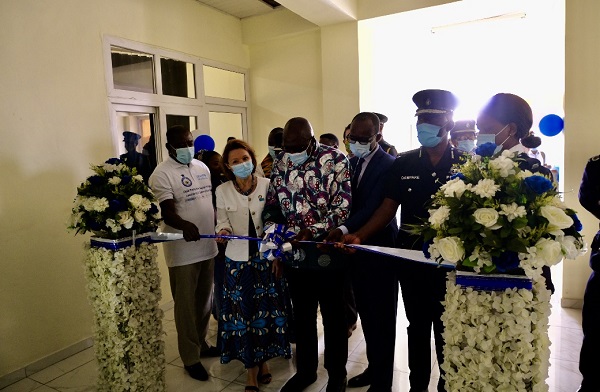 Mr Dery cutting the tape to inaugurate the Child Protection Digital Forensic Lab. With him is the UNICEF Representative in Ghana, Ms Anne-Claire Dufay

The Minister for the Interior, Mr Ambrose Dery, has stated that though the benefits of the digital evolution on children were enormous, it also posed a serious threat and risk to them.

He mentioned some of the risks as bullying, harassment and their images being  shared on the internet.

Mr Dery, at the inauguration in Accra last Thursday of the country’s first ever Child Protection Digital Forensic Laboratory of the Criminal Investigations Department (CID) of the Ghana Police Service, therefore, called for a collaborative effort among social workers, teachers, parents, policy makers and the private sector on one side to work with the police and other law enforcement agencies to systematically protect children online.

The Ghana Police Service, as the leading internal security agency, has the duty to protect these children online but the police alone cannot do it. We need to support the police to make the work successful,” he pointed out.

The laboratory, which is said to be the first in West and Central Africa, is designed specifically to prevent and respond to criminal acts of online abuse, exploitation and violence against children.

It  is to  strengthen the reliability and integrity of investigations of online abuse against children through the acquisition, analysis and presentation of electronic evidence from digital devices and the Internet.

This would in turn help to boost the conviction rates and prosecutions involving such crimes.

The laboratory was established by the CID and the Ministry of the Interior with technical support from UNICEF and funding from the Global Partnership to End Violence Against Children.

The Embassy of the United States and the British High Commission also supported it.

Mr Dery gave the assurance that the establishment of the laboratory would help build the capacity of the Ghana Police Service to combat crimes online and also prosecute those who commit such crimes.

On his part, the Director General of the CID, Commissioner of Police (COP) Ken Yeboah, said adducing evidence residing in cyber space to assist prosecution had been the most difficult task for the CID in contemporary times.

He said the establishment of the laboratory had become relevant, especially now that the country was recording an increase in child online cases with about 40 per cent of images of children uploaded on the web every week.

The UNICEF Representative in Ghana, Ms Anne-Claire Dufay, said the  COVID-19 pandemic among others prompted school closures and physical distancing measures which made online platforms and communities essential to maintaining relationships and also support children’s learning, socialisation and play.

However, she said that had also made it easier for online predators to access, groom, abuse and exploit girls and boys.

The number of reports related to child sexual abuse material being accessed, distributed or produced from Ghana has been increasing rapidly over the past years from 750 in 2016 to 7,000 in 2019. “

She said it was in the context of this that UNICEF has been supporting several line ministries and key actors to raise awareness of the new risks that children face today.

It will be recalled that in the August 12 - 18, 2020 edition of the Junior Graphic, it was published that a child protection digital forensic laboratory is to be set up by the Ghana Police Service to prevent and respond to cases of abuse of children and women online.