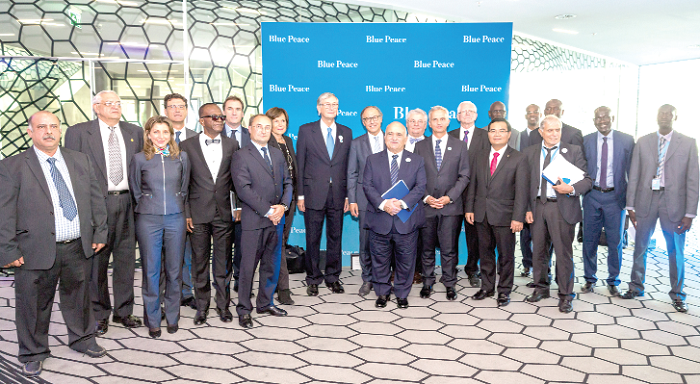 Members of the Global-High Level Panel on Water and Peace, with Federal councillor Didier Burkhalter, Head of the Swiss Federal Department of Foreign Affairs; François Münger, Director of the Geneva Water Hub, and Prof. Yves Flückiger, Rector of the University of Geneva

A report of the Global High-Level Panel on Water and Peace has been launched in Geneva, Switzerland, the green city of Europe.

The report, titled: “A Matter of Survival”, tries to generate extensive international awareness of water resources and their proper management.

Authored by the 15-member panel, the report indicated that the global water challenge was not only about development and human rights but also peace and security.

The panel is chaired by Dr Danilo Turk, a former Slovenian President and former Deputy Secretary-General of the UN.

Ghana is represented on the panel by Mr Mike Hammah, a former Member of Parliament (MP) and former Minister of State.

Journalists from the co-convening countries were invited to the launch of the report.

According to a study published by the International Institute of Democracy and Electoral Assistance, by 2050 more than half of the world’s population (52 per cent) would be living in regions where water would be extremely scarce.

Earlier, during a working lunch with the journalists, some of the panel members and those with close working relations with the panel had insisted on the need for a strong media that would reach out to the population.

“We need ambassadors who know what to talk about when they meet the populations,” they told the journalists.

The panel members also stressed the need for advocacy to be elevated to the level of a campaign or movement to draw the attention of all and get their buy-in into the new narratives on water and peace.

In a short remark to an abstract to the report, Dr Turk said the global water challenge needed to be addressed urgently in an integrated and comprehensive way at all levels, ranging from the United Nations Security Council and other multilateral organisations to grass-roots level institutions.

He said the panel had put forward several concrete recommendations in all those areas because “we believe that managing the global water challenge is not an ordinary task. It is a matter of survival”.

The abstract was broken down to eight headings that addressed, among other things, ‘The Drama of Water’, ‘Into the Abyss: Water in Armed Conflicts’, ‘An Ounce of Prevention: International Water Law and Transboundary Water Co-operation’, ‘Quantity and Quality: Strengthening of the Knowledge-based and Data-Driven Decision-making’, and ‘Co-operation for Security and Peace Building’.

The other issues are ‘People’s Diplomacy, Inter-Sectoral Water Management and Decision Making’, ‘Financial Innovation for Water Co-operation’, ‘In Pursuit of Agency: New Mechanism of Hydro-Diplomacy’ ‘Water as an Asset for Peace: Conclusions and Recommendation’.

The report said the world was facing the drama of water, as about two billion people lacked access to safe drinking water, with most of them living in fragile, often violent regions of the world.

“In contemporary armed conflicts, water resources and installations are being increasingly attracted and used as weapons of war. Moreover, water scarcity is exacerbated in a world with a growing population facing human-induced climate change. Despite these problems, humanity will have to find ways to produce 50 per cent more food and double energy production by the middle of the century,” it said.

The report also expressed dismay at the increasing tendency in a number of contemporary conflicts where water infrastructure was made the target of attacks or weapons of war, particularly in urban areas.

“These practices are flagrant violations of the International Humanitarian Law and must be condemned,” it said.

It also recommended an expansion in transboundary and regional water co-operation in river basins, including some traditionally sensitive river basins, as well as internationally shared aquifers.

During the discussions, Senegal came up for special recommendation because of the way it had led the efforts for water co-operation among countries in the Senegal River Basin.

In the region, they said, there was no sovereignty over water resources, adding: “Not even in Europe do we see this outstanding example of the common management of water resources.”

The panel also recommended the creation of a Blue Fund to undertake transboundary collaboration projects in water resources and infrastructure of significant size.

It also proposed the Global Observatory for Water and Peace to facilitate assistance to governments in using water as an instrument for co-operation.

“Since water supply is likely to become a major source of tension in the coming years, there is a huge potential today to make water a key medium for co-operation and driver of peace,” the Head of the Federal Counsellor, Didier Burkhalter, told the gathering at the launch at the Manson de la Paix in Geneva.

“We want to generate extensive international awareness of these realities and work towards a road map that will enable us to apply the reflection date,” he added.