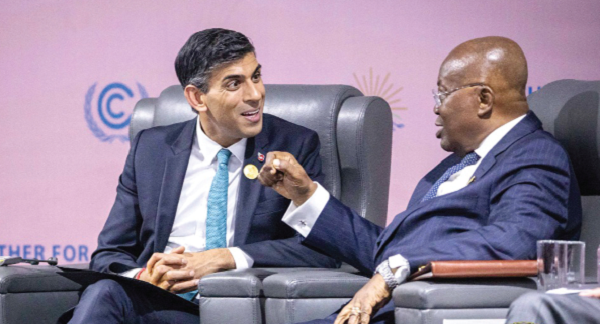 The FCLP is a new political forum that brings together governments and partners to work together to implement solutions that reduce forest loss, increase restoration and support sustainable development.

The launch was at the 27th Session of the Conference of Parties (COP 27) of the United Nations Framework Convention on Climate Change (UNFCCC) in Egypt.
The partnership will be co-chaired by Ghana and the United States.

President Akufo-Addo gave an assurance that Ghana was committed to sustainable land use and the protection and restoration of forests and other terrestrial ecosystems.

He pledged the country’s commitment to work with others to promote forests and other nature-based solutions to climate change.

He mentioned some of the forest policies being implemented by Ghana as the Ghana Cocoa Forest REDD+ Programme, the Ghana Shea Landscape Emission Reductions Project and the Green Ghana Project.


He indicated that the FCLP would provide a unique space for intergovernmental collaboration and coordinated action, with the inputs of non-state partners and stakeholders.

The President explained that Ghana would use its leadership of the FCLP to foster cooperation among tropical forest countries in Africa and beyond to make the FCLP a successful vehicle to drive significant and impactful contributions to climate action.

The UK Prime Minister, for his part, described forests as one of the greatest natural wonders of the world but which continued to be undervalued and underestimated.

He explained that the best way to achieve the 1.5 degrees Celsius global warming target required was for the world to unite to protect forests.

Mr Sunak called on countries to deliver their climate promises, adding that the UK would deliver its £1.5 billion pledge, and that it was also committing £19 million towards forests protection.

He called on the private sector to commit funds to address the drivers of deforestation.

The FCLP creates a platform for Heads of State and Government and their ministers to combine their political efforts to accelerate global action to halt and reverse forest loss and land degradation by 2030, while delivering sustainable development and promoting an inclusive rural transformation.

It follows the Glasgow Leaders’ Declaration on Forests and Land Use, adopted by world leaders at the COP 26 last year, where they committed to halt and reverse forest loss and land degradation by 2030.

The new partnership will ensure delivery and continued political focus on the 2030 target of the Glasgow Leaders’ Declaration.

The FCLP’s Ministerial session, which will drive the ambition of the partnership, will be co-chaired by Ghana’s Minister of Lands and Natural Resources, Samuel Abu Jinapor, and the United States Special Presidential Envoy for Climate, Senator John Kerry.