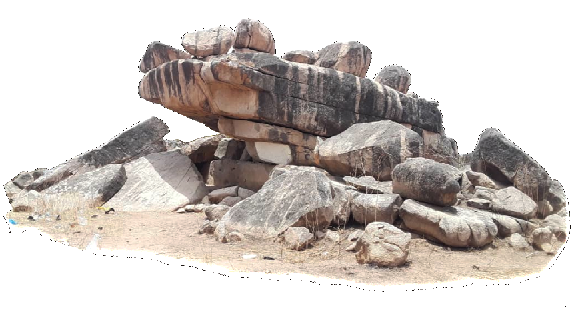 This is how the Cave school looks like from afar

For centuries the unique, beautiful and culturally rich landscape of the Tongo Hills, the Whistling Rocks and the spiritual powers of the Tengzug Shrine in the Talensi District in the Upper East Region have all combined effectively to put the region on the World Tourism Map.

Archaeological surveys have provided evidence of human use of the caves and shrines in that area which dates back to 500 B.C. (Before Christ).

From the 1880s to the 1890s, the Tongo Hills served as a refuge for fugitives running away from marauding slave raiders. It was also the focal point of resistance to British Colonial rule and invasion in 1911.

Today, the Tongo Hills and Tengzug Shrine have been proposed for the United Nations Educational, Scientific and Cultural Organisation (UNESCO) World Heritage site.

The sites have also won several awards including the Visitor Attraction of the Year Award in 2005 by the Upper East Regional branch of the Ghana Tourism Authority (GTA). In 2001, the Upper East Region GTA rewarded the site for Exemplary Traditional Cultural Preservation.

Students across the world, renowned researchers, anthropologists, archaeologists and academia continue to troop to the sites for both academic and research purposes.

Tongo is a small town near the Upper East Regional capital, Bolgatanga. It is the capital of the Talensi District. The town is known for the Tengzug Shrine and for its sowing and harvest festivals.

It is also known for the Tongo Whistling Rocks located about 10 kilometres from Bolgatanga, where granite rocks jut dramatically from the terrain.

The rocks also make strange whistling sounds in November and December when the harmattan wind blows from the Sahara across northern Ghana.

The Tongo Hills, with its alluring rock formations, caves and natural rock shelters, is the sacred epicentre of the Talensi people and home to numerous sacred shrines.

Indeed, at the Tongo Hills one can find the Cave School, the Chief’s Palace, Donkey, Hyena and hiding caves, making them some of the busiest tourist attractions in the region, Ghana and the world as a whole.

The Tongo Hills nurtures powerful shrines where people from all walks of life go for consultations and make wishes for wealth, spiritual healing and fortification, among other things.

The shrines are also the venues of the principal ritual festivals of the Talensi people. The festivals are associated with particular seasons and are usually accompanied by song and dance performances.

The Bo'araam is a thanksgiving festival which comes off at the end of harvest in October. Young men are ritually inducted into what can truly be described as a rite of passage.

The Golib or Gologo Festival is celebrated to mark the inception of the rainy season and a prelude to planting. It is celebrated at the Nyoo Earth Shrine, the third largest shrine in the Tongo Hills. The festival lasts for a month from March to April. One of the fundamental tenets of Golib is the prohibition of fighting.

Between 1965 and 1985, formal education started in the Cave School with an initial pupil population of 25. There were separate areas of rocks mapped out for cooking and eating, as well as classrooms.

Usually, tourists are led to explore the mud houses at the Tengzug Chief’s Palace. Each of the mud houses belongs to one household. The dwellings are all built into each other and connected by a labyrinth of narrow passages.

Outside each house is a shrine – a stone stump plastered with chicken blood and feathers, or occasionally decapitated livestock stuffed with leaves and various charms.

At the upper terrace of the Chief's Palace, tourists and visitors can have a panoramic view of what looks like cylindrical shapes of houses with miniature doorways and linked to each other by short walls to protect occupants from intruders.

According to the Tour Guide, Mr Hanson Goldan, who took the Daily Graphic around the palace, there are currently 307 people living in the houses at the Chief's Palace.

At the time of the visit by the Daily Graphic, the chief was said to have gone on a short trip.

Mr Goldan showed this reporter the central part of the Chief’s Palace where meetings are held and decisions taken.

A section of the palace also houses tombs of former Tengzug chiefs. There are also shrines of the first Tengzug Chief and the current Tengzug Chief.

It is worthy to note that visiting all these interesting tourist sites in the Tengzug area attracts a fee of GH¢20 for Ghanaian adults, GH¢10 for students and GH¢150 for researchers.

For non-Ghanaians, the adults pay a fee of GH¢30 and students or volunteers pay GH¢25, while children under 12 years of age pay GH¢10. Visiting and entering the shrine may attract additional fees in the form of donations to the elders in the shrine.

These donations do not have a fixed amount. There are other charges depending on the demands of a visitor or tourist.

While conducting this reporter round some of the attractions, Mr Goldan expressed concern about the inability of some stakeholders to support the tourist sites with tourists’ receptive facilities and other facilities to further boost tourism in the area.

He noted that recently some investors came to assess the possibility of improving the facilities in the area and promised to come back after two weeks but “it is now more than two weeks since they made that promise.”

Some historical accounts indicate that the Tongo Hills formed part of a frontier belt between conquest states of Dagbon and Mamprugu to the south and those of the Mossi kingdoms to the north.

Its dense population made up of predominantly farmers offered rich pickings for predatory slave raiders from the surrounding cavalry states. A large proportion of slaves in the Akan forest kingdoms originated from these frontier communities.

A final surge of south bound captives was generated by the activities of slave raiders in the 1880s and 1890s. By the end of the 19th Century, the Tongo Hills was widely recognised as an established site of sacred power.

The Tongo Hills was also among the last areas in Ghana to submit to British rule. The ancestor shrine, Tona'ab, served as a refuge for and potent symbol of those who resisted “pacification".

It was only in 1911 that the British finally moved to end that resistance. The Talensis were evicted from the hills and all access to sacred sites was banned.

Yet only four years later, British officers realised that many people were returning secretly to the hills and that the shrines had been “reactivated”.

Colonial forces mounted a second assault in 1915, but by the 1920s it was clear that the great ancestor shrine, Tona'ab, was again flourishing and could not be destroyed.

That same tenacity lives on till today in the vibrant communities of the Tongo Hills.

Therefore, the spectacular rocky heights, caves and forest groves of the Tongo Hills are a sacred dwelling place of earth gods and ancestral spirits of the Talensis.

The uniquely designed earthen houses are interspersed with the hills and boulders to create a cultural landscape of astounding beauty.

The people of Talensi say this landscape is timeless because it has existed since the beginning of time. “our ancestors, our grandfathers, our fathers all met the Tona'ab deity here," they maintain.