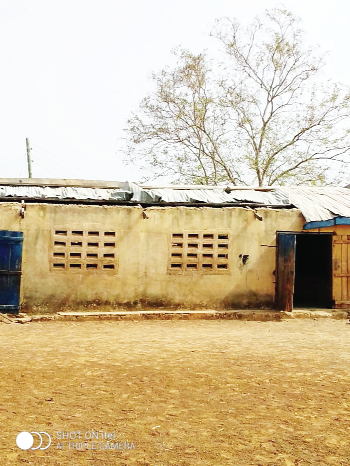 A section of the roofless four-unit classroom block

Pupils and teachers of the Kunkon Islamic Primary School in the Yendi municipality of the Northern Region have been studying and teaching in a dilapidated roofless structure since a rainstorm battered the only four-unit classroom block serving about 150 pupils in March 2020.

According to the school’s authority, the structure was still in use because they did not have anywhere to keep the students, as all efforts for renovation had proved futile.

The school’s building, which had its roof completely ripped off by the storm in March last year, poses grave danger to both the pupils and the teachers as it could collapse at any moment.

That notwithstanding, the school has now turned into a playground for livestock and other wild reptiles, especially when school is not in session due to the dilapidated and forlorn nature of the structure.

Checks by the Daily Graphic showed that a number of pupils had dropped out of the school due to the nature of the building, while others continued to study in the structures and under trees.

Also, the school’s textbooks and other learning materials had been left at the mercy of the weather as there was no place to keep them.

When contacted, the headmaster of the school, Mr Shani Mohammed, declined to comment on the matter.

However, some of the teachers who spoke to the Daily Graphic on condition of anonymity said they had written to the assembly, National Disaster Management Organisation (NADMO) and other benevolent organisations for support but no positive response had been received as yet.

The Chief of the Community, Kunkon Lana Iddi Andani, expressed worry about the situation and said he had not received any positive results yet, except the many fruitless visits to the school by authorities.

He, therefore, appealed to the authorities, to as a matter of urgency, come to the aid of the school by renovating the building to improve on academic activities.

A parent, Mr Mumuni Latif, said they did not feel it was safe allowing their children to go to school especially when it rained, adding that the situation if not given urgent attention would have a devastating effect on their children, as it might cause more pupils to drop out of school.

Some of the pupils who spoke to the Daily Graphic lamented that all their books were destroyed during the rainstorm, adding that anytime it was about to rain, they ran for shelter because they could not stay in the classrooms.

A pupil, Ms Asana Zakaria, said “I don’t always feel comfortable sitting in the classroom to learn because of the nature of the building, it can collapse at any moment”.

Another pupil, Yakubu Salifu, appealed to the government to come to their aid to re-roof the school building for them.

Meanwhile, all attempts to find out from the Yendi Municipal Assembly and the Ghana Education Service if the plight of the school had come to their notice and what they were doing about it proved futile as calls to the assembly went unanswered and the Yendi Municipal Director of Education, Mr Bright Amston Lawoe, said he could not speak on the matter.