Presidential declarations in NDC good but. . . 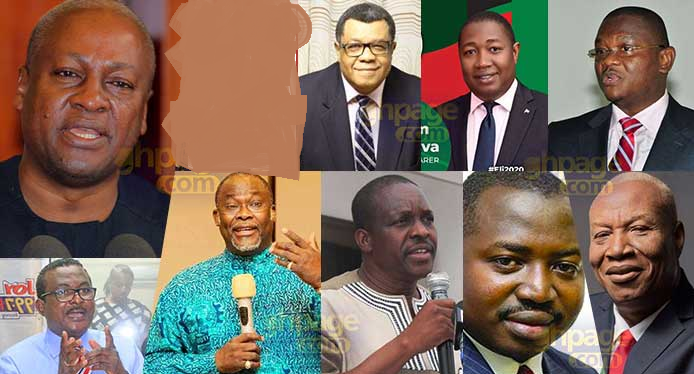 The biggest opposition party, the National Democratic Congress (NDC), is in a critical phase of beginning the process of finding a flagbearer of the party for the 2020 polls.

For the first time, notwithstanding any last minute chickening out of aspirants, the NDC  is going to have 10 or more presidential aspirants seeking to lead the party into the 2020 presidential elections.

Though the high numbers may be a positive signal and good for the party in terms of raising needed revenue and re-energising the structures of the party, managing such a large number of presidential aspirants in the intra-party elections  will not come easy, especially as former President John Mahama’s entrance has stirred an expected controversy, particularly among students of politics.

In view of what is happening within the NDC, it appears there is a   flagbearership scramble. But of all the 10 aspirants, namely the Second Deputy Speaker of Parliament, Mr Alban Kingsford Sumana Bagbin; a former Trade Minister, Mr Ekwow Spio-Garbrah; a former Chief Executive Officer (CEO) of the National Health Insurance Authority (NHIA), Mr Sylvester Adinam Mensah and a former Vice-Chancellor of the University of Professional Studies, Accra (UPSA), Professor Joshua Alabi, that have written to the party officially to inform it about their intentions to lead the party for the 2020 presidential election; the aspirant to watch is former President John Dramani Mahama, who has become the man to beat in the NDC race to the Jubilee House.

The expectation is that by the time the party issues out its rules, regulations and criteria for selection of the flagbearer, it will be able to prune down the number of contestants. When the numbers are just too many for the flagbearship contest it creates a negative impression and suggests that the party is not focused on who should lead.

With the ongoing scramble for leadership in the NDC, it is already getting very disappointing with disparaging comments by some of the aspirants against one another.

In their bid to lead the biggest opposition party, some aspirants are already tearing each other apart and in the process shooting themselves in the foot. It will do no good to the party and will rather be a disservice, if the aspirants are not measured in their utterances.

Aspirants need to understand and know that at the end of the intra-party contest it is what the aspirants say and do to each other that will determine the fate of the NDC party in the 2020 polls.

After all, the NDC is eventually going to contest the ruling New Patriotic Party (NPP) and now that some aspirants are indulging in unpleasant language against each other, what good do they expect to gain in the 2020 polls?

The best evidence against an opponent they say in law is his own incriminating evidence. So this must be the guiding principle for the NDC.

NPP's mother of all presidential primaries

There was a time when the NPP in 2007 had 18 presidential contestants lined up for the party’s flagbearership race. It was described as the “mother of all presidential primaries.”

I recall names such as Mr. Yaw Osafo-Maafo, Mr Kwabena Agyepong, Prof. Mike Oquaye, Mr Kwame Hackman Owusu-Agyemang and Dr Barfuor Adjei-Barwuah as some of those who successfully filed their nominations.

With pomp and ceremony, the mad rush for the NPP flagbeareship slot created an impression as if the aspirants were fighting for their selfish gains and had excess money to spend on their campaigns. Many had asked why so many aspirants wasted their time and money when they knew very well that they didn’t have a chance to win the primaries.

It did not bode well for the good image of the NPP as a party seeking to govern the affairs of state. No wonder the party lost the 2008 elections.

This time, it appears the NDC is also toeing a similar path as the search for the party’s flagbearer begins. There is this school of thought that many of the aspirants are in it just to be noticed.

But after the intra-party presidential polls, how will the NDC ensure that party cohesion prevails? So far, the party has done quite well with the organisation of its branch and constituency polls and by next month will complete that of the regional polls, thus leaving the national election of party officers, as well as the flagbearer contest outstanding.

To keep the NDC intact and formidable after their intra-party polls will require fairness and equal opportunity for all throughout the electoral processes.

In so doing, the party must create an even playing field for all the presidential aspirants to go about their campaigns without any intimidation. At the end of the day, the NDC delegates must be given unimpeded access to elect their own leaders and their voices and votes counted.

The party needs to work so hard that once the flagbearer is also elected, all the ranks will come on board to work with the person.  It will not be an easy task as the party is expected to elect a flagbearer who has broad public acceptability. Such a flagbearer must understand the huge responsibility the position comes with. This is because if you hold the flag of a party, you hold it for a group of people and it must be done with care and responsibility.

The NDC lost the 2016 elections  to the governing NPP led by Nana Addo Dankwa Akufo-Addo. Akufo-Addo garnered 5, 716, 609 votes, representing 53.84 per cent to snatch the presidency from Mahama who secured 4,713,277 votes, representing 44.40 per cent. The NDC also lost more than 40 parliamentary seats to the NPP, which gave the latter a majority in Parliament. This is the task ahead for the NDC.

Instead of spewing out venom against each other,  aspirants must place emphasis on policy debate, which is devoid of acrimony. Our politics must do away with  selfish sentiments and opinions and focus on the national interest which seems to be secondary all the time.

I wish the NDC well as they navigate this critical process.