We will be back to winning ways — Akosombo Textiles 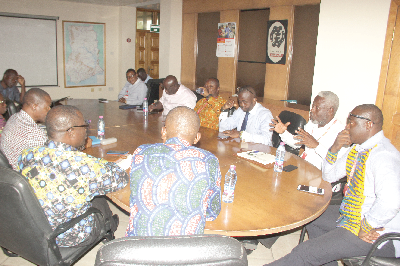 The management of Akosombo Textiles Limited (ATL) says it has put in place a comprehensive transformational plan to bring the company back to winning ways within the next three years.

According to the management, the strategy involves the acquisition of modern machinery, building the capacity of workers, ensuring cost-effective production, switching to efficient sources of power and expanding to new markets.

Officials of the company stated this in an interview with the Daily Graphic in Accra last Tuesday.

The management of the company earlier interacted with the editorial board of the Daily Graphic last Monday where they discussed issues including the state of ATL to assure the public about steps being taken to turn the fortunes of the company around.

This was after the paper had published a story in its Thursday, June 27, 2019 issue which stated that ATL was still struggling to find its feet one year after the government had injected GH¢17 million to resuscitate the company.

The acting Chief Executive Officer (CEO) of ATL, Mr Kofi Boateng, said the overall objective of the transformational plan was to revamp the company and make it profitable.

He said the first phase of the strategy, which was carried out in the last six months, focused on putting the right machinery in place to boost production and also build the capacity of workers.

Mr Boateng also explained that the company invested part of the GH¢ 17 million in capital expenditure which resulted in the replacement of outdated machines with modern ones.

“When we received the money, we were able to buy digital screen engraver and image plotter and these machines are key to the operation of textile industries.

“For the second phase of the plan, we are focusing on growth. Our plant has the capacity to produce 25 million yards of textiles, but in 2018, the company produced below one million because of some challenges; we are targeting five million yards,” he added.

According to the CEO, the company had received orders worth three million yards and was, therefore, exploring other sources to meet the target for the year.
Mr Boateng said the company was also considering the possibility of diversifying its business operations by the end of next year.

The Factory Manager at ATL, Mr Kenneth Asare, said the cost of power was one of the biggest challenges facing the company, but added that plans were underway to switch from the use of Residual Fuel Oil (RFO) to biomass energy to reduce the cost of production.

“Electricity cost is so high in the country and this is affecting our operations. Would need more efficient boilers to reduce cost of energy by 50 per cent,” he added.

The Executive Director in charge of Finance and Administration, Mr Justice Asiedu Boateng, also mentioned piracy and smuggling of designs and textile products as major challenges affecting the company.

“Piracy has dealt a big blow to not only ATL but other companies. We make our designs, and within three months the designs are copied and produced in the Far East. They use our labels and print made in Ghana on it and manage to bring it into the country without paying duties because they smuggle them,” he said.

Mr Boateng urged the Ministries of Finance, Trade and Industry and other stakeholders to fast-track the signing of an agreement for the printing of a tax stamp to help fight piracy.

For his part, the Head of Sales and Marketing at ATL, Mrs Petra Aba Asamoah, said the company was now reaching out to European and African markets as part of its transformational agenda.