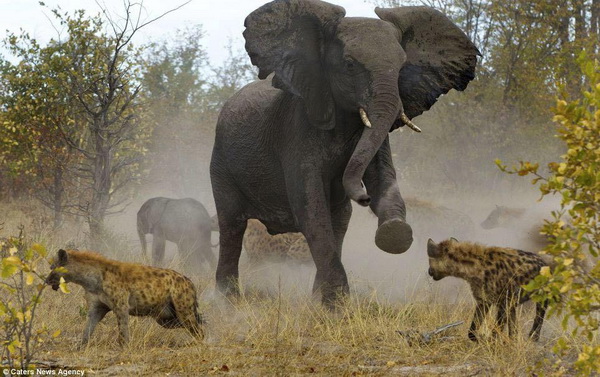 Ghana’s upstream petroleum industry, which is one of the fast evolving industries in the country, in a little over a decade of oil production, is witnessing a turf-war which could best be described as a “romance” between the elephant and the hyena in the jungle of hydrocarbons.

The situation follows orders by the Ministry of Energy, the sector ministry to Eni Ghana and Springfield Ghana to unitize after two discoveries of oil resources said to have straddled within the same area with different licenses.

The discoveries
Springfield Ghana’s discovery, Afina is in the West Cape Three Points Block 2 Area (WCTP2), while the Eni Ghana which is currently the operator of the Sankofa Field, is offshore Cape Three Points (OCTP).

The ministry views the two discoveries as coming from the same resource, but straddles or overlap the two blocks, which presently are operated by Eni and Springfield. There is therefore the need to carry out a joint operation to exploit the resource economically.

The parties are yet to reach an agreement after several directives from the sector ministry, forcing the ministry to direct them to unitize, as the country’s laws – Regulation 50 (6) of the Petroleum (Exploration and Production) (General) Regulation, 2018 (LI 2359) indicate.

There are questions lingering though; have all avenues been explored; are the two parties ready to unitize; and does it mean that whenever blocks are straddled, operators necessarily have to unitize?

With the mandate to promote local content and local participation in the upstream petroleum industry, another crucial question could be what counsel the upstream oil industry regulator, the Petroleum Commission, offered the ministry before the directives?

The oil and gas sector remains one industry that demands a lot of time investment due to the huge risk and financial requirement, requiring that in instances of disputes and disagreements as in the instant case, dialogue rather than a resort to force and legalities are prioritized.

The Afina WCTP2, no doubt was a major discovery by Ghanaian international exploration and production company, Springfield Ghana, which is now said to be straddled with the already developed and in production Eni’s OCTP.

In March 2018 after Springfield’s acquisition of three-dimensional (3D) broadband seismic data, and conducting extensive analysis on it, the company wrote to the Minister for Energy demonstrating that their analysis showed the Sankofa Reservoir extended into the WCTP-2 contract area.

On those discussions, Eni is said to have dismissed Springfield’s claim in 2018 insisting that per the data available to them, there was no evidence of straddling.

A month later, the ministry invited Springfield to make a presentation to it and Ghana National Petroleum Corporation (GNPC) which is a partner in both blocks after the minister tasked GNPC to independently evaluate Springfield’s claim and present a report to the Ministry.

Industry sources claim further drilling proved Springfield’s claim following which the GNPC informed the sector ministry with ample evidence to support their claim of extension on the Sankofa East producing field into the WCTP 2.

The minister in accordance with the law and following the findings from GNPC, consequently directed the parties to commence the unitization discussions for the common interest of the parties and the country.

Meetings
Although there was a directive for discussions between the two sides for possible unitization and to report back to the ministry, this did not work.

Armed with the evidence from Springfield, and to ensure the two sides complied, there was a ministerial directive leading to the imposition of non-negotiable terms and conditions on Eni and Springfield.

The ministry then told the two sides their doors remained open, should either of the parties require any clarification and or additional information. Some industry players described the directive as too swift and that there was the need to allot ample time to address the issues.

Typical of the industry, a lot goes into ventures such as joint operations, mergers and acquisitions, especially in the face of Coronavirus (Covid-19) where global consumption of oil dipped drastically affecting prices in an era where many had to resort to cost cutting.

Precedent
It would be recalled that the country's first independent oil fields – Jubilee, went through a similar situation leading to partnerships known as the Jubilee Partners and then TEN Partners.

Jubilee field started with a unitization. After the discoveries in 2007, the two partnerships were given more than 18-months with a pre-unitization agreement that led to unitization in 2009.

In the case of the Jubilee Field, the two companies were at the same stage of exploration, which resulted in the easy exchange, study, and analyses of data prior to the unitization.

Unfortunately, in the case of WTCP-2 and OCTP licenses, the location of Afina discovery, and OCTP, the exchange of data and the work between the two partnerships has not been facilitated. That aside, Sankofa has been developed and is producing.

As it is now, despite the imposition, Eni is still the operator of the multi-billion dollar OCTP Integrated Oil and Gas Development Project with Eni 44.44 per cent, Vitol 35.56 per cent, and GNPC 20 per cent, which produces oil and non-associated gas of the Sankofa and Gye-Nyame reservoirs.

The directive by the ministry has been at a standstill for months. Eni says it has requested of the stakeholders for an adequate time, with the appropriate data and further assessment drilling in order to conduct a proper analysis of the situation.

He gave an assurance that “We at Eni are ready to explore any potential unitization or any other form of coordinated development that would be appropriate in accordance with Ghanaian law and the industry’s best practices.”

Unitizations, he said, are a common practice in the oil and gas sector and that when an oil reservoir straddles across the boundaries of two exploration licenses; unitization is allowed to maximize production.

The process, he said, allows for sharing of risk, production and costs among the parties on a fair and equitable basis and that Eni had been involved in the unitization of straddling fields throughout the world.

Sharing expertise
“We are glad to share our expertise and experience with Ghana, we are in no way against evaluating the possibility for unitization should sufficient and reliable subsurface data show that the Sankofa field and Springfield’s Afina discovery have a common reservoir in dynamic communication, and that unitization is warranted in order to ensure optimum recovery,” he said.

Mr Valenti said Eni Ghana had not failed to meet the deadline and exchange data. However, till date, and despite its attempts to sit at the same table, “we have not received the necessary discovery data to establish any potential link between the Afina discovery – which was drilled one year ago and never tested as well as the Sankofa oil field – which was discovered in 2012 and has been in production for more than three-and-a-half years and to conclude they are part of the same reservoir.”

“We need to ascertain if a reservoir is straddling the license border, is in dynamic communication, and whether unitization or any other form of coordinated development would be appropriate in accordance with Ghanaian law,” he emphasised.

Experience
Much as they are not against unitization and the readiness share experience with Ghana, he said, it was important to note that, the fact that a discovery straddles across two licenses did not necessarily mean that the oil from one part flowed to the other, and could be produced.

However, to understand if it is possible, “you need to share technical data and conduct thorough assessments. Once this connection is verified, and indeed the technical possibility to produce is confirmed, then you can start discussing the terms of the unitization.”

Mr Valenti said despite Eni’s efforts, this essential collaboration had not occurred for them to move to the next level.

However, a source close to the sector ministry indicated that Eni and Springfield were given ample time and opportunities to exchange the relevant data, hence failure led to the ministry imposing the terms and conditions.

Elephant and hyena
Interestingly, Springfield is also claiming they have difficulties meeting with the Eni side for discussions.

Industry players say, the Petroleum Commission is best placed to intervene and described a possible merger of Eni Ghana and Springfield would be a boost for Ghana.

The speed with which the terms and conditions were imposed by the sector ministry leaves Springfield at the mercy of an experienced company such as Eni Ghana – it is like arranging a fight between an elephant and a hyena in the jungle.

However, if proper negotiations are done, and the romance between Eni Ghana and Springfield is well guided, Eni will place a lot of expertise at the doorstep of the Ghanaian company. Ghana will also boast of an indigenous company entering the upstream space within just a decade.

In any case, if Springfield feels strong about its potentials at the WCTP2, they are at liberty to independently start their own process of development and production and forget unitization.

As the African proverbs go - the elephant does not limp when walking on thorns in its attempt to protect its baby, while a cowardly hyena lives longer and learns when to stay away from baby elephants.