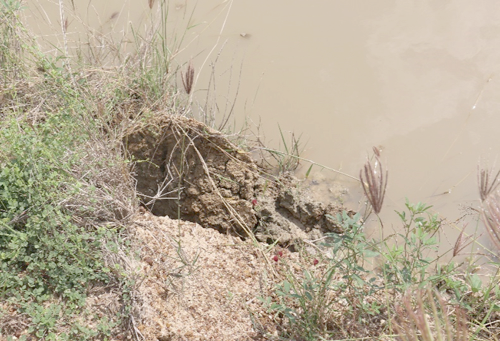 A section of the upstream wall of the dam breaking off. PHOTO CREDIT: ACEP.
30.5k Shares

also revealed that there were no clear sustainability plans to ensure that the projects would serve the purpose for which they were executed.

Using the Dawa Irrigation dam in the Greater Accra Region as , the study by the Africa Centre for Energy Policy (ACEP ) highlighted that there was no formal plan for the maintenance of the dam, which has been subjected to misuse.

It also noted that there was no adequate technical support and oversight over activities by the dam due to funding constraints and no professional maintenance works since rehabilitation.

It subsequently called for maintenance and execution plans coupled with regular monitoring to help manage identified risks and ensure that communities see the value of the natural resource.

“Beneficiaries must own the dam and take charge of minor maintenance works and the district assembly must liaise with the Dam Committee to plan for and execute timely professional maintenance of the dam,” the report from the study said.

It also said there was the need to constitute a local to monitor the use of the dam to prevent misuse while the Ghana Irrigation Development Authority (GIDA) must be resourced to revisit of boulders to prevent erosion of the upstream portion of the dam wall.

The study was conducted to assess the extent to which projects benefit the community and also to establish if the contribution of oil revenues to national development was worthwhile.

All this is in a bid to promote transparent, accountable and efficient utilisation of oil revenues.

According to the report, there was inadequate information on impacts of ABFA funded projects and it sought to gather evidence on of the irrigation dam. The selection of the dams assessed was informed by the 2015 and 2016 value for money analysis.

Located in Dawa, a community in the Ningo Prampram area of the Greater Accra Region, the dam was constructed between 2011 and 2013. Its wall was breached in 2013 and therefore necessitated rehabilitation in 2013.

The cost of the project, however, increased from GHc 1.6 million to GHc 2.4 million due to it being abandoned at a point. Total petroleum revenues disbursed towards the project between 2014 and 2017 totalled GHc 740,393.38.

A social baseline information showed that Dawa is a predominantly homogenous society that its shallow stream could not reliably support domestic activities.

Economically, farming, fishing and cattle rearing are the mainstay of the community’s economy and its farming is rain-fed. Crops cultivated include pepper, watermelon, tomato and . As a result, incomes are limited to seasonal harvests.

Some farmers in the community lost their farms and incomes during rehabilitation and it also experienced challenges with cattle rearing and fishing, as fishing in the stream is on basis.

Environmentally, the community has a difficulty in accessing water when the stream dried up and it also had a high prevalence of hygiene-related diseases.

Due to the availability of the dam, farmers have been able to introduce new crops, widening the basket of goods from which they can generate incomes as they had a regular source of water for both domestic and other uses.

“Fishing continues in the dry season as the stream doesn’t dry up as before and farmers get extra incomes from yield in the dry season though there are losses. Fishing (mudfish and tilapia) is done all year but on a small scale,” the report said.

The report revealed that the high incidence of typhoid and malaria was attributable to poor sanitation related to the dam.

“Weakened dam walls over time will pose a risk to farmers and users,” the report noted.

Some of the challenges identified include no formal plan for maintenance of the dam, misuse of the dam, inadequate technical support and oversight due to funding constraints and no professional maintenance works since rehabilitation.