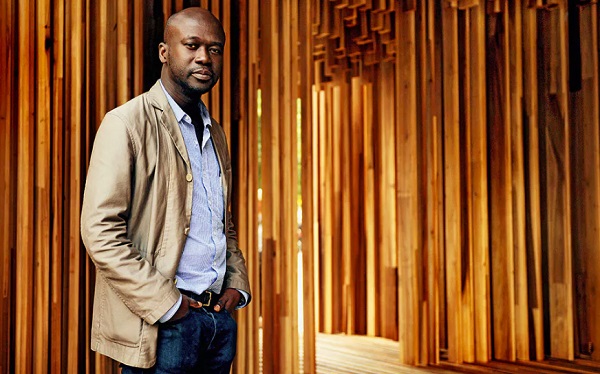 Adjaye, the founder and principal of Adjaye Associates said in a statement. “I have sought to craft a building that not only understands its landscape but one that will be unique to Accra and the Ghanaian Nation.”

The new structure, inspired by the concepts of unity, harmony, and spirituality, will sit on 14 acres of gardens near the Osu Cemetery in Accra, and it will be a gathering place for people of all faiths.

“The Cathedral will address the missing link in our nation’s architecture by providing a Church of national purpose,” President Akufo-Addo said in the same statement.

An artist's impression of the National Cathedral in Ghana

“It will be an interdenominational house of worship and prayer, as well as serve as the venue for formal state occasions of a religious nature, such as presidential inaugurations, state funerals, and national thanksgiving services.”

In addition to having a number of chapels and a baptistery, the cathedral will house a 5,000-seat auditorium, a music school, an art gallery, and the Bible Museum and Documentation Centre, which will tackle the subjects of Christianity and nation-building in Ghana.

The site’s multifunctionality suits Adjaye well—the architect has worked on projects that range from landmarks like the National Museum of African American History and Culture in Washington, D.C., to retail venues like the Proenza Schouler flagship in New York, to public-use structures like the Gwangju Pavilion in Gwangju, South Korea, an outdoor reading room.

An artist's impression of the National Cathedral in Ghana

Sir Adjaye has an office in Accra, headed by Associate Director, Alice Asafu-Adjaye. His practice’s presence in Africa continues to grow with a number of on-going projects in Gabon, Ghana and Nigeria. A concept store in Lagos – currently under construction, is due to complete later this year.

Aside from the National Cathedral, Sir Adjaye is also the principal architect on three other massive projects in Ghana including, the 47-acre Princes Town Resort in Takoradi, the Elmina College and Petronia City.

Find out more about Sir Adjaye's Ghanaian projects below;

Set on a dramatic sandy white 47-acre beach, Prince Town is a five star resort complex that is designed to follow the contours of the coastline, while nestling discreetly below the existing treeline.

Accommodating 150 rooms and 30 villas, the hotel’s dominant material is locally sourced timber. The main building snakes along the shoreline, with a lagoon used for water sports to its rear. The ground floor encompasses a shaded beachside promenade as the main axis through the site. In addition, there are conferencing suites, a spa, sports facilities and play areas for children, interspersed along the length of the building, to encourage use of the promenade as a lively social as well as navigational space.

The resort will establish links with the village of Princes Town, with a piazza that can be used for local events as well as shops and commercial areas. The area is also home to Princes Town Fort - the only German fort in Ghana. Part of the World Heritage Programme, it was built in 1683 and is a notable tourist attraction.

Elmina College establishes a meaningful dialogue with African modernity – its expression and its historical references. An international boarding high school, the project is set within landscaped gardens on a 116-acre site.

It comprises teaching facilities, an Olympic size swimming pool, sports centre, library, auditorium, and student and staff residences. Drawing on local climatic and cultural conditions, the design concept has been informed by the ecology of the forest carpet – where the ground plane offers a distinct micro-climate that is sheltered from the harsh equatorial sun.

Also borrowing from the notion of a Maghreb citadel, the college is conceived as a large elevated quad – a landscaped superstructure – that contains a set of buildings and spaces. Cut-outs within the superstructure offer the opportunity to add to the project as it expands and evolves into the future.

The site is located within the forest belt in a celebrated part of Ghana that is not only home to a historic slave fort – visited by President Obama – but also has a longstanding educational legacy of excellence, enhanced by exchange programmes with Eton College in the UK and known to have fostered a number of West Africa’s eminent intellectuals.

This pedigree of excellence and progressive international dialogue is reflected in the uncompromising contemporaneity of the scheme. A cast concrete plate, the superstructure, is lifted by ten metres and punctured by a series of apertures and microclimates – like a giant roof with cut-outs containing buildings. The architecture, itself, recedes to allow landscape and context to dominate, while encouraging a blurring of inside and outside.

Petronia City is the vision of CEO and Founder of Wonda World Estates, Nana Kwame Bediako. Designed around the ideology of ‘work, live, learn and play’, Petronia City is a self-sustaining, master-planned, integrated city. It will attract, retain and support businesses, human capital needs and elevate Ghana’s Western Region into a world-class business location, tourist destination and home.

The city’s 2000-acre development will include residential, office, industrial, commercial, leisure and hospitality space. It will be the first at the heart of the Western Region of Ghana – home to the country’s rapidly growing oil, gas and mining industries. This incredible project began in October 2013 and will be realised in three key phases over the next 10 years. 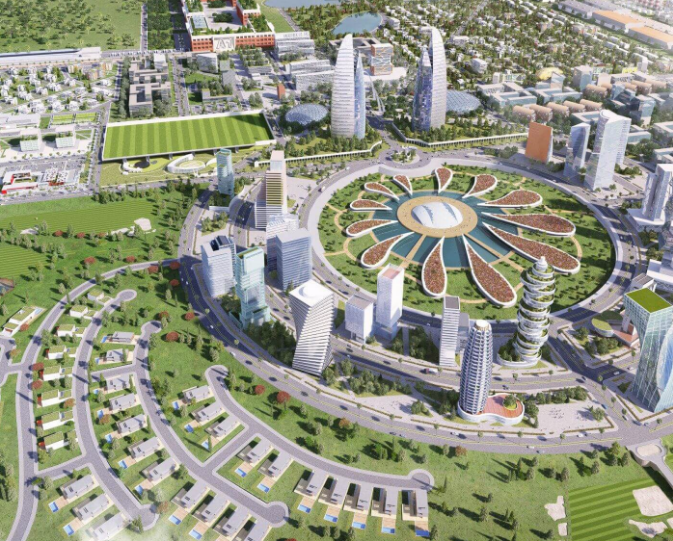 The Petronia City project will unroll in 3 phases over the next 10 years. It kicked off in October 2013 with full acquisition of construction machinery and equipment. It was then followed by clearing of about 200 acres of the site as well as the access roads and service areas. We are currently in Phase 1 of the project as we are engaging Investors.

Sir David Adjaye OBE is recognized as a leading architect of his generation. Adjaye was born in Tanzania to Ghanaian parents and his influences range from contemporary art, music and science to African art forms and the civic life of cities. In 1994, he set up his first office, where his ingenious use of materials and his sculptural ability established him as an architect with an artist’s sensibility and vision. He reformed his studio as Adjaye Associates in 2000. The firm now has offices in London, New York and Accra with projects in the US, UK, Europe, Africa, Asia and the Middle East. His largest project to date, the $540 million Smithsonian Institute National Museum of African American History and Culture, opened on the National Mall in Washington DC in fall of 2016 and was named Cultural Event of the Year by the New York Times.

Other prominent completed work include the Idea Stores in London (2005), which were credited with pioneering a new approach to library services, the Moscow School of Management SKOLKOVO (2010), the Sugar Hill mixed-use social housing scheme in Harlem, New York (2015); and the Aishti Foundation retail and art complex in Beirut (2015). Prominent ongoing projects include a new home for the Studio Museum in Harlem, New York, a new headquarters building for the International Finance Corporation in Dakar, and the just-announced National Holocaust Memorial and Learning Centre in London.

In 2017, Adjaye was recently knighted by Her Majesty the Queen for services to Architecture, following the previous award of an OBE in 2007. The same year, he was recognized as one of the 100 most influential people of the year by TIME magazine. He has additionally received the Design Miami/ Artist of the Year title in 2011, the Wall Street Journal Innovator Award in 2013 and the 2016 Panerai London Design Medal from the London Design Festival.

Adjaye is known for his frequent collaborations with contemporary artists on installations and exhibitions. Most notably, he designed the 56th Venice Art Biennale with curator Okwui Enwezor (2015). The Upper Room, featuring thirteen paintings by Chris Ofili (2002), is now part of the permanent collection of Tate Britain. Further examples include Within Reach, a second installation with Ofili in the British pavilion at the Venice Biennale (2003) and the Thyssen-Bornemisza Art for the 21st Century Pavilion that was designed to show Your Black Horizon, a projection work by Olafur Eliasson, at the 2005 Venice Biennale.

Adjaye has held distinguished professorships at the Harvard, Princeton and Yale universities. He has also taught at the Royal College of Art, where he had previously studied, and at the Architectural Association School in London. The material from his ten-year study of the capital cities of Africa was exhibited as Urban Africa at London’s Design Museum (2010) and published as Adjaye Africa Architecture (Thames & Hudson, 2011). He was the artistic director of GEO-graphics: A map of art practices in Africa, past and present, a major exhibition at the Centre for Fine Arts, Brussels (2010). In 2015, a comprehensive retrospective exhibition of his work to date launched at Haus der Kunst in Munich and the Art Institute of Chicago, and was subsequently shown at the Garage Museum of Contemporary Art in Moscow.