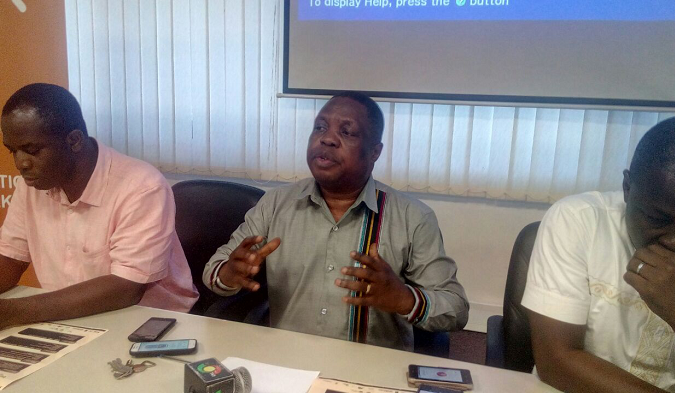 Director-General of the centre, Mr Kwasi Adu-Gyan, speaking at the launch Follow @Graphicgh

The Ghana-India Kofi Annan Centre of Excellence (KACE) has added development research, innovations and software development to its core activity of training people in various fields of Information and Communication Technology (ICT).

This, according to the Director-General of the centre, Mr Kwasi Adu-Gyan is to help make software acquisition cheaper for companies, institutions and individuals who spend huge sums of money on software.

Speaking at a media launch of the centre’s 2017 Innovation Week, slated for December 5 to 7, this year, Mr Adu-Gyan explained the centre, also known as Advanced Information Technology Institute (aiti) was set up by the governments of Ghana and India to initially bridge the gap between academia and industry by training people to acquire requisite skills to help meet demands of the job market.

He said software was very expensive in third world countries, including Ghana and that the move by the KACE was to help bring down the cost and rise to become a major hub for software development in Ghana and the sub- region.

“We are in the process of developing this centre as a major hub for software development and software technology centre for the whole country and the sub-region”, he stated.

Mr Adu-Gyan explained that the centre would adopt open source technology in order to realise its goal of becoming a major software hub in the country.

“We are doing this because we know, as a third world country, software can be very, very expensive and can be a burden on budget of a country”, he said.

The innovation week, which is an annual event is on the theme: “Exponential technologies and innovations; an enabler in socio-economic development of Ghana”.

The event will bring together key stakeholders to deliberate on emerging ICT issues which impact development in the country and the world over.

The 2017 edition will focus on embracing innovation and efficiency in all sectors and fast-tracking growth and success rates for start-up and Small and Medium Scale Enterprises (SMEs).

Speaking at the launch, Dr John Effah, a Senior Lecturer at the Department of Operations and Management Information Systems at the University of Ghana Business School, called on the academia to support the initiative by the centre.