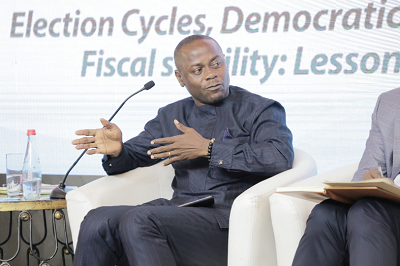 The Trades Union Congress (TUC), two academics and a section of the public say they expect the government to introduce innovative measures to support private businesses, invest in energy sector infrastructure and increase spending on social protection in the 2021 budget.

They said such measures would help speed up the recovery of the economy from the shocks of the COVID-19 pandemic and help protect the poor against its scourge.

A section of the public that spoke to the Daily Graphic said the budget must tackle road construction in both trunk and inner city roads, provide drinking water and ensure the sustainability of social interventions programmes.
They bemoaned the poor road infrastructure leading to various communities across the country and appealed to the government to commit more resources to that sector.

“For the second year running, the government has declared 2021 ‘year of roads’ and we expect to see a vigorous implementation of the policy,” Mr Kojo Dadson, an entrepreneur, requested.

For the TUC, an umbrella body of many labour unions, the government should make provisions in the budget for the payment of pension lump sum owed workers who retired last year.

The labour union, in a statement ahead of the budget, set to be laid before Parliament tomorrow, said although the government had committed itself to paying up the difference between what retirees received last year and what they should have received, it had failed to live up to its promise, resulting in loss of confidence in the government and financial difficulties for the affected workers.

The two academics are Professor Eric Osei-Assibey of the Department of Economics of the University of Ghana and the Dean of Student Affairs at the Ghana Communications Technology University, Dr Michael Nana Owusu-Akomeah.

They were speaking to the Daily Graphic in separate interviews on their expectations of the 2021 Budget and Economic Policy of the government.

Prof. Osei-Assibey said it was his expectation that the government would introduce innovative ways to generate more revenue domestically in the 2021 budget to help finance government spending, which was likely to increase this year.

He said it was imperative for the government to create some fiscal space to spend more to protect the private sector and provide support for the vulnerable.
For instance, he said, government expenditure on social protection was expected to increase, as more people had lost their sources of income due to the devastating effects of the pandemic.

“It is not going to be easy for the government, but it will spend more on social interventions. Tax could be raised to generate more revenue to ensure the sustainability of social protection interventions. I expect some innovation in generating revenue domestically because the government can’t keep relying on borrowed funds,” he said.

To help speed up economic recovery and position the economy on the path of growth, he said, the government would have to support businesses in the hospitality, services, export, agricultural and other high capital-intensive industries whose collapse would have a general effect on the stability of the economy.

"I expect the government to spend more to support the private sector, especially the areas that have been the hardest hit, to help bring steady recovery from the shocks of the pandemic,” he said.

He said with the country’s deficit at 11 per cent, there was limited fiscal space for high expenditure, hence the need for the government to be innovative and more calculative in the budget.

Prof. Osei-Assibey also wanted to see the necessary financial commitments to the energy sector to prevent another power crisis in the near future.

For his part, Dr Owusu-Akomeah said with report from the ‘COVID-19 Business Tracker’ which estimates that some 770,000 workers had their wages reduced and about 42,000 workers laid off as a result of the effects of the pandemic, he expected the government to make available funding to empower individuals to create new jobs.

He also wanted the budget to outline interventions designed to help reduce the financial burden on the public.

In random interviews for their views on and expectations of the budget, a taxi driver, Mr Solomon Adu Mantey, and a mechanic, Mr Ofori Boateng, said they expected the government to introduce some subsidies on petroleum

products to help reduce the plight of players in the transport sector and reduce import duties to save retail businesses.

He also urged the government to ensure that citizens across the country had access to potable water sustainably.

"The free water during the lock down period was good and helped many poor people but the general provision of water, even for sale, must be consistent," he said.

Mr Mantey said if the prices of fuel were reduced, it would help bring some level of comfort to transport operators, adding that the sector was one of the sectors affected most by the effects of the pandemic and needed support.

“If they can reduce fuel prices, it will help drivers because since the COVID-19 came, the government has been supporting some people but not those in the transport sector,” he said.

For Mr Boateng, a reduction in import duties would help save retail businesses which employed many vulnerable people in society.

A nursing student, Ms Keziah Lartey, said she expected the budget to make massive investment in road construction by creating new roads and upgrading existing ones that would enable agricultural produce to reach market centres.

She said often Ghanaian farmers were saddled with losses after harvesting due to bad roads.

"If the roads are fixed and the potholes are covered, it will help improve economic activities in the country, especially in farming areas," she said.

The Secretary General of the TUC, Dr Anthony Yaw Baah, who signed the union’s statement, said it was hopeful that the government would use the budget to make it up to labour.

“Workers who are retiring in 2021 are facing the same challenge. They also deserve lump-sum top-up,” the statement said.

The union further advised the government to review its decision to exclude all security agencies from the pension unification programme, as it would “perpetuate the discrimination in pensions”.

“As we stated in our New Year message, the TUC cannot support such a policy because it undermines the entire pension reform initiative under Act 766. We call on the government, once again, to convene a stakeholder consultative meeting to discuss this and other pertinent issues about pension,” it said.

The TUC also expressed its expectation of the budget to offer hope to Ghanaians by addressing the damage COVID-19 had caused to the economy.

It noted that the “huge fiscal hole” caused by the pandemic must be “plugged, while addressing the rising debt situation”.

“Given the revenue shortfalls, fiscal moderation is expected to be one of the main features of this year’s budget statement,” it said.

The labour union also said in addition to addressing the macroeconomic challenges caused by COVID-19, it expected the 2021 Budget to be informed by the lessons from COVID-19, in particular “the need for self-sufficiency in several areas of national life”.