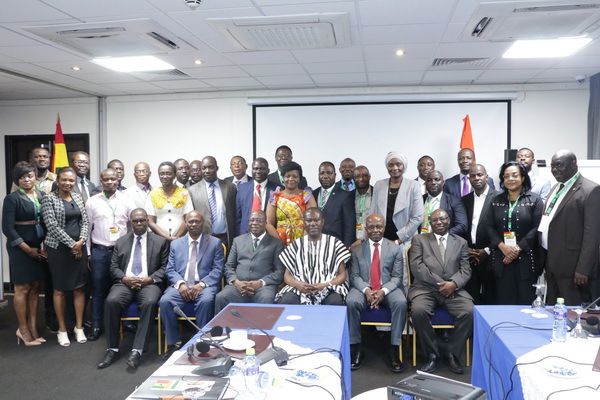 Some officials of the Ghana Cocoa Board and Le Couseil du Café-Cacao after the meeting in Accra
30.5k Shares

Ghana and Cote d’Ivoire have agreed to set a floor price for cocoa in the global commodity market, below which none of the two countries will sell its produce.

It forms part of 12 action points the two countries agreed to implement at the end of a two-day meeting to help enhance the benefits that they derive from the production of the crop.

Another key action point is the adoption of a concurrent opening season and announcement of producer prices to be paid to farmers in the two countries.

The action points were contained in a communiqué issued in Accra last Tuesday after a two-day meeting between officials of the Ghana Cocoa Board (COCOBOD) and the Le Couseil du Café-Cacao of Cote d’Ivoire.

The initiatives are the first of their kind by Ghana and Cote d'Ivoire, which have, for decades, supplied more than 60 per cent of the world's cocoa output.

They seek to concretise and set into action a collaborative effort started by President Nana Addo Dankwa Akufo-Addo and his Ivorian counterpart, President Alhassan Ouattara, on March 26 this year aimed at uniting their fronts in a bid to present a common voice on matters of the world's most sought-after soft commodity.

The Ghana delegation to the meeting was led by the Chief Executive Officer (CEO) of COCOBOD, Mr Joseph Boahen Aidoo.

The two agencies, which oversee cocoa production in their respective countries, said the communique represented a Comprehensive Implementation Plan "and concretised details of the specific actions for achieving the vision of the two heads of states."

The communique touched on the marketing and economics, production, research and the governance structure of the cooperation between Ghana and Cote d'Ivoire in the area of cocoa production.

It said the two institutions, which oversee the cocoa business, agreed to conduct a study to determine the floor price of cocoa, constitute a joint committee for the promotion of cocoa consumption in both countries and across the West African sub-region,  work further towards the adoption of strategies for the implementation of international standards organisation (ISO) Sustainable and Traceable Cocoa Standard and have concurrent opening of cocoa season and announcement of producer prices.

They also agreed to forge closer collaboration between the Cocoa Research Institute of Ghana (CRIG) and the National Centre of Agronomic Research (CNRA) in Cote d’Ivoire, work together towards the adoption of good practices for adaptation and mitigation of the adverse effects of climate change based on experiences of the two countries and implement national strategies to restore and preserve cocoa landscapes, adopt a common approach to the coordination of private sector initiatives and continue the cutting of cocoa Swollen Shoot virus-infected trees in their respective countries.

The communiqué further enjoins the two countries to collect data that link cocoa farmers to their farms and collaborate in the fight against worst forms of child labour.

The two institutions also adopted the Draft Charter and Administrative Rules to guide the governance and operations of the Ghana-Cote d’Ivoire Cooperation.

Mr Aidoo told the Daily Graphic that the efforts were part of a broader initiative by the two countries to help seek the interest of farmers in the cocoa production process.

He said he was optimistic that the successful implementation of the strategies would help improve earnings from the crop for the betterment of the farmers.

On how the two countries intended to achieve a floor price for the crop across the two countries, Mr Aidoo said: “One of the things we will do is to try and make our trading systems work along the same lines.”

“We want it to be such that we can say we are both selling at this time, at this price and anything below that we will not sell,” he said.