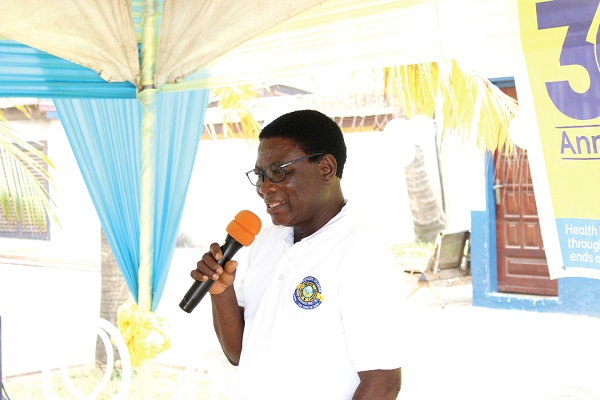 A former Assistant Commissioner of the Customs Division of the Ghana Revenue Authority (GRA), Dennis Aggrey-Ampiah, has advised custom officers to eschew corruption in their dealings with members of the public.

He said the officers who worked at the division which generated 70 per cent of internal revenue, needed to rather exhibit virtues of honesty, selflessness, integrity and loyalty to the country in order to meet the GRA’s GH¢80.3 billion revenue collection target for the year.

Mr Aggrey-Ampiah gave the advice at the launch of the 30th anniversary of the 1992 Customs Excise and Preventive Service (CEPS) Course 1 and 2 members of the Customs Division of the GRA in Accra.

“Customs generates a significant percentage of our internal revenue in the country, therefore, if you allow corruption to creep into the way they work if you allow selfishness, pride, greed and arrogance in your dealings, the customers will turn into smugglers and smuggle the goods and we will lose revenue,” he said.

The launch of the anniversary started with a health walk on the principal streets in the Ministries enclave in Accra.

The group then converged on the Kwofie Gardens at the Customs head office to share fond memories of their 1992 recruitment process which saw about 4,000 candidates applying with only 250 of them being successfully recruited into the service.

It was also a moment to make merry and deliberate on how the year group can remain dedicated to the division.

The anniversary was on the theme, “30 years of dedicated service; reminiscing the past, celebrating the future”.

Mr Aggrey-Ampiah explained that the time had come for the country to trigger development from within, adding “We cannot continue to go to the IMF, the World Bank and other development partners with cap in hand to beg for aid”.

To successfully achieve this agenda, he said customs officers must place Ghana first in their dealings to rake in the needed revenue.

“That impression that as soon as you are enrolled to Customs, within three years you have to build or buy a house is a thing of the past and this group has proved that,” he added.

Mr Aggrey-Ampiah, who was in charge of the recruitment process in 1992, noted that the group had endeared themselves to the service for the past 30 years because they were recruited based on merit.

He, therefore, implored them to continue to notice junior officers to ensure sanity within the division.

A former Chief Collector, Joseph Kwabena Owusu, who launched the 30th anniversary, urged the officers to guard against using their uniform to exploit the public.

“I want you to conduct yourselves in a manner that within 10 years after your retirement, your people will call you back,” he added.

The President of the association, who is a Principal Revenue Officer and Systems Administrator at the Tema Collection, Esther Kwakyewa Amekudzi, said their year group was special because of the longevity of their training period

Her year group, she said, had distinguished itself by working hard and learning other professions to give back to the customs division.

She noted that as part of efforts to show appreciation to the Kpetoe Training School, the year group would be making some donations in the coming days.

She urged her colleagues to put their shoulders to the wheel in order to help meet the target.