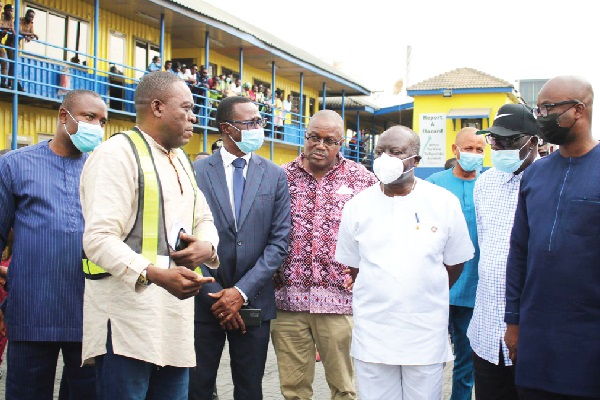 The Minister of Finance, Ken Ofori-Atta, has called on the Ghana Revenue Authority (GRA) to adopt new strategies to address tax leakages at the Tema Port.

Doing that, he explained, would help the government to raise the needed revenue for national development.

Speaking during a tour of some terminals at the Tema Port yesterday the minister expressed worry that the loss of revenue at the ports, particularly through tax evasion, was being aided by some members of the trading public in alleged connivance with some port officials.

"While it is worth commending the GRA for the efforts they are putting in to ensure the needed revenues are raised from the country's ports, a lot more ought be done to block any loopholes through which state funds are lost," Mr Ofori-Atta said when he toured some terminals at the Tema Port.

The visit was to enable the minister and his team to assess the state of cargoes listed on the Uncleared Cargo List (UCL) at the various holding terminals at the port.

It was also to enable him to identify what digitised measures could be employed in tracking such cargoes to help address the issues of revenue leakage.

Mr Ofori-Atta directed port officials to furnish his office with the container numbers of uncleared cargoes at their terminals.

The visit took the team to the Atlas and Amaris terminals, as well as the Refrigerated Terminal operated by the Ghana Ports and Harbours Authority (GPHA).

Mr Ofori-Atta noted that uncleared cargoes did not only create congestion but also led to holding back revenues that would have accrued to government if they were cleared on time by importers.

The team also assessed the challenges faced by the terminals in relation to the management and auctioning of cargoes on UCL and how such could be resolved.

Mr Ofori-Atta maintained that the sustainability of a robust digitised measure would ensure that human contacts were reduced or eliminated entirely, curb corruption and boost domestic revenue mobilisation.

The introduction of an automated system to guide the auctioning of containers on UCL, he explained, would also ensure a system of traceability and accountability.

He said the implementation of the Integrated Customs Management System (ICUMS) helped in raking in GH¢ 16.08 billion in total revenue to the country at the end of 2021 as against GH¢ 11.25 billion in 2019 prior to the ICUMS implementation.

However, the minister said there were still some loopholes which were being exploited by some members of the trading public, "and this we want to ensure will no longer be the norm".