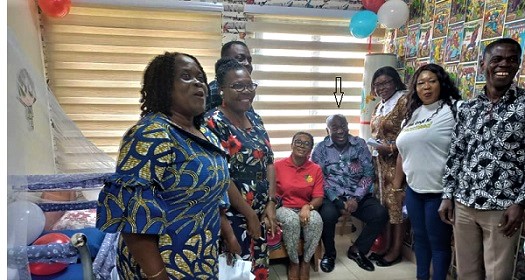 The Trades Union Congress of Ghana (TUC) has inaugurated its breastfeeding and baby sitting room at their head office in Accra.

The well-furnished room will serve as a place where breastfeeding mothers can nurse their children and leave their babies in the care of a nanny during working hours.

The Deputy Secretary General of the TUC, Joshua Ansah, said the initiative was something the union had been advocating and negotiating with employers and employees for some time now and “we thought it wise to set the pace for others to follow”.

"This is something we have been advocating and actually negotiating with other employers. But we want to signal to employers that if we have started and have been able to do it, then they, as employers have no excuse," he said.

Mr Ansah added that for women employees to be productive at their various workplaces, they needed to have comfort and the peace of mind especially within their maternity period.

Setting up a common room for breastfeeding and nursing babies, he said, was a good start in making sure women were comfortable and their welfare taken care of at their workplaces.

The National Women's Council Chairperson of the TUC, Rebecca Kwashie, said the thought of leaving babies at home and coming to work for long hours had for years been a worry to many working mothers which had held them from giving their best.

She further stated that the breastfeeding room would aid nursing mothers to be productive.

Madam Kwashie urged all employers to provide such facilities for mothers to reduce the inconsistencies and inconveniences that came with nursing a baby as a working mother.

The Head of the Gender and Child Protection Department of the TUC, Alberta Laryea-Djan, said the idea of the project started when the union went with the Ghana Health Service to a programme where they realised that some notable companies and organisations had made provision for their employees who were nursing mothers.

"We realised that they have done this thing. So as a workers’ organisation, we also need to do this so that we can sell the idea to those that belong to other unions and organisations. The idea was further sold to the leadership and they agreed to help us put up this room," she said.

She urged all organisations and unions to pick up the idea to increase productivity because breastfeeding provided good health and was a human rights issue.

“It also lessens the severity and sometimes can alleviate the risk of postpartum depression," he added.

He added that breastfeeding was also environmentally friendly as it produced no waste or pollution from packaging.