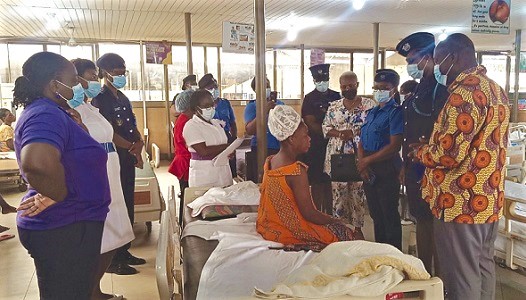 Members of the Customs Ladies Club at the bedside of one of the beneficiaries of the financial support. With them is Dr Richard Anthony (right), Medical Director, Tema General Hospital. Picture: BENJAMIN XORNAM GLOVER
30.5k Shares

The Customs Ladies Club, a club of the female employees of the Customs Division of the Ghana Revenue Authority (GRA) at the Tema Collection, last Wednesday paid GH¢16,720 to settle the medical bills of 16 patients detained at the Tema General Hospital in the Greater Accra Region.

The patients, some of whom have been on admission between two weeks and two months and treated of their ailments, were detained due to their inability to settle their medical bills.

The bills were paid on behalf of the executive of the Tema Collection of the Customs Ladies Club by Senior Revenue Officer, Rachael Jacintha Pyne, who disclosed that plans were underway to help other vulnerable patients who were unable to pay their medical bills and other auxiliary medical costs.

At a brief ceremony to make the payment, Ms Pyne said the strategic vision of the newly elected executive was to be committed in helping the citizens of Tema and beyond, especially nursing mothers and their babies, who had recovered from their sickness but could not afford the bills presented to them.

“Because we live and work in Tema, we decided to come to the Tema General Hospital to help children and women who come to seek healthcare but cannot pay their bills,” she said.

Ms Pyne said in consultation with the sector commanders and support from other stakeholders, they were able to mobilise some resources to settle the medical bills for the 16 persons who were in ‘detention’ at the Tema General Hospital.

The Medical Director of the Tema General Hospital, Dr Richard Anthony, who received the delegation from the Customs Ladies Club, confirmed that the beneficiaries of the gesture really needed help to be able to settle their bills.

He expressed appreciation to the group for their benevolence and encouraged them to do more and if possible adopt one of the wards so that they would, from time to time help others who may be in need.

Dr Anthony appealed to corporate institutions and philanthropists to come to the aid of other persons in ‘detention’ at the facility.

He said the management of the hospital was not comfortable with the ‘detention’ policy, but the situation called for it, adding that, occasionally, management engaged the Social Welfare Department to assist in finding ways to support patients who found themselves in such situation.

Some of the nursing mothers in ‘detention’ in the facility commended the leadership of the club for facilitating their release from the facility.