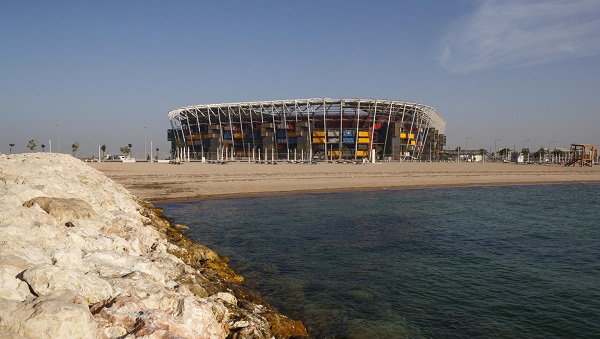 Stadium 974 (formerly known as the Ras Abu Aboud Stadium), the match venue for the Black Stars clash against Portugal in Group H of the FIFA World Cup tomorrow is set to go down in history as the first fully demountable covered football stadium.

Located at Ras Abu Aboud, 10 kilometres east of central Doha, the 44,089-capacity stadium is a temporary venue made from 974 recycled shipping containers that will host seven matches during the 2022 FIFA World Cup, after which it will be dismantled. It is the first temporary venue in FIFA World Cup history.

The stadium is situated in the portside area and in sight of Doha’s coast, fans at Stadium 974 will feel the cool breeze as it rolls in from the Arabian Gulf.

Touted as a display of Qatar’s commitment to cost-effective sustainability and daring design, the unique venue pays tribute to Qatar’s long-standing tradition of worldwide trade and seafaring.

Not only is 974 the international dialling code for Qatar, but it is also the exact number of shipping containers used in the construction.

After the tournament, organisers say the containers and super-structure will be reused.


A waterfront development and a dynamic hub for business are also expected to be constructed at the site after the World Cup.

It hosted its first match on November 30, 2021, on the opening day of the 2021 FIFA Arab Cup, between the United Arab Emirates and Syria. The stadium hosted a total of six matches during the tournament.

Watch a stadium tour of Stadium 974 below;