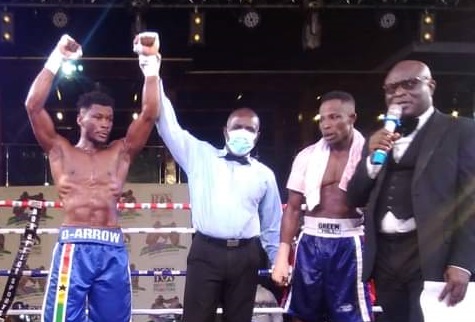 Boxer Patrick Allottey Saturday night scored a technical knockout feat against challenger Victus Kemavor in their 10-round super welterweight clash at the Idrowhyt Events Centre at Dansoman in Accra.

More than six months after returning from suspension for attacking a soccer fan, Allottey, (30), whose last fight was a loss, spent little time in dismantling a feeble and listless Kemavor in the second round with a barrage of blows, forcing the latter's corner to throw in the towel.

The win moves the Ghanaian to 41 wins with four losses and no draws.

Allottey who lost a world title belt via knockout against Jaime Munguia in the US last year made it worse when he was sanctioned by the GBA for opening a ghastly cut on the right eye of a soccer fan during a football match at the Accra Stadium in January.

Upstart Kemavor (11-4-0) whose last fight was also a loss against compatriot John Koudeha at the Aborigine Beach Resort in Keta last year failed to impress the few who came to watch the show.

He hardly connected any punches and was always at the receiving side of Allotey's hefty powerful punches.

The Keta-based pugilist was smaller in size and in reach against the burly Allotey and despite his low weight compared to Allotey, he could not box and was knocked down twice, in each of the two rounds.
Commey noted afterwards that he is back to win the world title and the warm up bout only goes to prove he is ready to fight the best in the world.

Aside from the top on the bill on the night dubbed ‘Boxing Day Rumble’ which was put together by Box Office Promotions, Aborigines Promotions and Cabic Promotions, another highlight was the return of veteran former world champion, Joseph Agbeko who dropped weight to stop journeyman Albert Commey in another 10 round Super flyweight contest in the fifth round via a technical knockout decision.

In other bouts on the night Emmanuel Quaye stopped Raymond Ansah in the third round in their eight round super welterweight bout before Issufu Yusuf Seidu made light work of Joshua Owusu in the first round.

Earlier on, the promising Michael Pappoe had defeated David Quaye in the third round via knockout in their six round super featherweight bout.