Coach of the Black Bombers, Kwasi Ofori Asare has blamed Ornella Sathoud's defeat to Kerry Davis of England in the ongoing Commonwealth Games in Birmingham on her inability to train with the national amateur boxing team in Accra.

Coach Asare told Graphic Online in Birmingham that Ornella trained on her own with the assistance of zoom meetings from the team and that affected her performance.

The 34-year-old lost 0-4 to England's Kerry in the women's middleweight Round of 32 clash at the NEC Hall in Birmingham.

Reacting to Ornella's defeat, Coach Asare said Ornella got tired in the final rounds of the bout and gave the English boxer the chance to come into the fight. 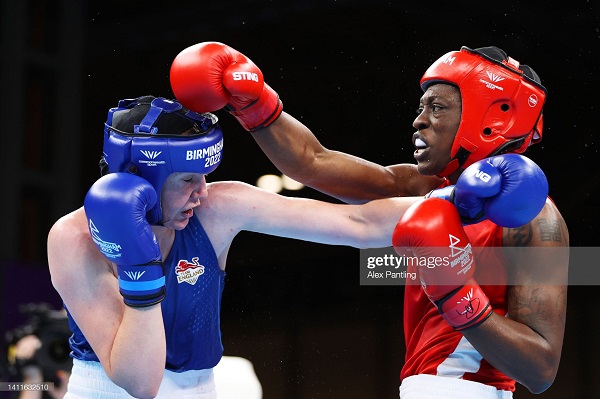 "It is a blow to us because we expected her to qualify from the preliminary stage but you could tell from her performance that she got tired in the final round," Coach Asare said.

"The story could have been different if she had trained with the team in Accra but it was a positive result so we have to look forward to the next competition."

Ornella made her third appearance at the international stage in Birmingham having competed in the 2018 Commonwealth Games in Gold Coast, Australia and African Games in Morocco in 2019.

Meanwhile, Ornella has set her sights on qualify for the 2024 Olympic Games in Paris after exiting the Commonwealth Games at the preliminary stage.